It’s the rare pets” target=”_blank”>pet bird<, escaped from its home about three years ago and had been missing ever since.

The workers received a “gift” and it was sitting on the church porch.

Recently, a woman working at a church in Lancaster County discovered a cockatiel perched on her church’s property.

“I saw that it was a bird. And this bird did not move or fly away,” Louise Duncan, a secretary at Christ United Methodist Church in Lancaster, told Fox News Digital about her discovery. 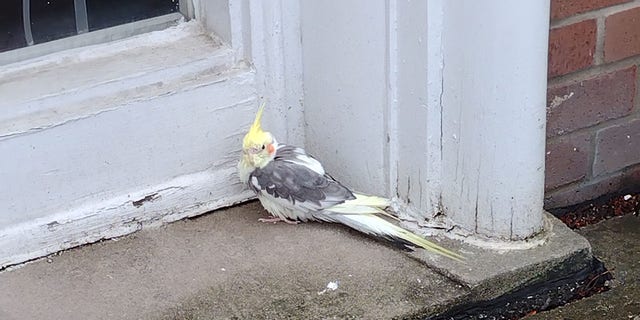 “He just sort of stared at me with his kind of big bird eyes. I saw that the plume was yellow and that he had orange cheeks. And I thought, This has got to be a pet.”

Duncan phoned ORCA — the Organization for Responsible Care of Animals — an animal rescue group with a location nearby, to request help.

She also took a picture of the bird with her cellphone — and told her pastor, Roseann Goldberg-Taylor of Christ United Methodist Church, that they received a “gift” and it was sitting on the church porch.

The bird — clearly used to being free — became frantic, popped open the box and escaped.

Pastor Goldberg-Taylor corralled the bird into a box and put a lid on it.

But the bird — clearly used to being free — became frantic, popped open the box and escaped, they said.

When an ORCA rescue worker arrived at the church to help out, the worker was able to get the bird into a safe container. ORCA took the bird back to its location to see about reuniting it with its owners.

“We call it a blessing,” Pastor Goldberg-Taylor said of the experience. “We help all God’s creatures at United Methodist Church.”

To confirm the bird’s identity, the family suggested the bird hear the theme song from the ’60s TV show, “The Andy Griffith Show” — the bird had always loved that tune.

She added, “Anybody is welcomed at our church, even a cockatiel.”

Once ORCA put a picture of the bird on Facebook, a response soon came in from a family in Ephrata, some 15 miles away from the church. They said their beloved cockatiel, Lucky, had escaped from their home three years ago — and that this bird might be theirs. They sent pictures of Lucky to Orca.

To confirm the bird’s identity, the family suggested the bird hear the theme song from the 1960s television show, “The Andy Griffith Show” — the bird had loved that tune. Sure enough, when the cockatiel heard the tune, it began dancing and whistling.

So this was Lucky — a bird that loved to dance and whistle. And somehow, ever since it had gone missing, it had survived — on a wing and a prayer.

“And on top of that, it was pretty unbelievable he made it three years, wherever he was. We are just happy he is safe.”

“He has been through a lot for the past few years, and we really just want to give him some stability and consistency. He will be very loved here with us.”

Fox News Digital reached out to Lucky’s original family for comment — and heard back this weekend from Jasen Arriaga, one of Lucky’s first owners.

“We bought Lucky from a bird sanctuary” when “my son was just a toddler,” said Arriaga.

The family had the bird for about a year, he said, until the day their young son “opened the door for a second and out goes Lucky. A bird being a bird, Lucky hated being in the cage.”

He added that “it really hurts us that we can’t keep him now,” he said. The family lives in a smaller place now and is unable to take the bird back.

“Lucky will be a great companion to someone who has patience for a bird,” he added. “He loves sunrises [and] sunsets … I really hope he finds a big home with a patient human.” He also shared the above YouTube video with Fox News Digital.

As ORCA’s staff wrote on its Facebook page, “Sometimes the stories don’t end EXACTLY how we hoped, but we still believe it’s a happy ending.”

LOST DOG REUNITED WITH OWNER AFTER A WEEK IN A SNOW

They added, “Lucky’s family ultimately decided that they were unable to keep him, and we now have him in our office again. We are thankful they care about him so much that they made this very difficult decision.”

“Our ORCA staff has decided that we are going to keep Lucky as our office pet. He has been through a lot for the past few years, and we really just want to give him some stability and consistency,” the group also wrote.

“He will be very loved here with us.”

STUDY SHOWS THE EFFECT OWNING PETS HAS ON OWNERS’ BRAINS

Louise Duncan of Christ United Methodist Church found the experience to be a teachable moment, she said.

“I’ve always been one to want to find a good ending to something difficult for something or somebody, like a pet or a person. And [this experience] reinforces the need to never stop doing that,” she said.