“As a devout Catholic and mother of five in six years, I feel that God blessed my husband and me with our beautiful family – five children in six years almost to the day. But that may not be what we should – and it’s not up to me to dictate that that’s what other people should do, and it’s an issue of fairness and justice for poorer women in our country.”

For years, President Biden – also Catholic – supported the Hyde Amendment with the rationale that religious Americans shouldn’t have to pay for procedures they fundamentally oppose. He reversed his position during his campaign, leading to strong criticism upon his inauguration from the U.S. Conference of Catholic Bishops.

“I must point out that our new President has pledged to pursue certain policies that would advance moral evils and threaten human life and dignity, most seriously in the areas of abortion, contraception, marriage, and gender,” Los Angeles Archbishop Jose Gomez, the organization’s president, said. “Of deep concern is the liberty of the Church and the freedom of believers to live according to their consciences.” 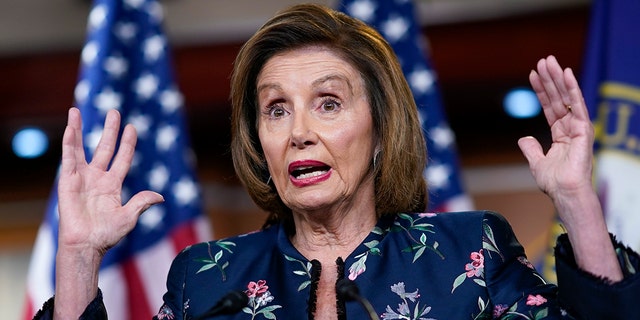 Speaker of the House Nancy Pelosi, D-Calif., meets with reporters at the Capitol in Washington, Thursday, July 22, 2021. Pelosi discussed her reasons for rejecting two Republicans chosen by House GOP leader Kevin McCarthy to be on the committee investigating the Jan. 6 Capitol insurrection. (AP Photo/J. Scott Applewhite)

Senate Minority Leader Mitch McConnell, R-Ky., said earlier this month that Biden’s newfound opposition to the Hyde Amendment is “yet another way in which the administration has sold itself as moderate and unifying” but “is now spiraling way, way to the left.”