Her Christian family survived the conflicts revolution in 1979, then sought refuge in the U.S. in the mid-1980s – and she’s warning that freedoms can be lost in “any country” if regular people don’t stick up for them.

Anita Edgarian attracted national attention after a July 26 education” target=”_blank”>school< in West Chester, Penn. She recounted the altercation in an interview with Ainsley Earhardt on “Fox & Friends” Wednesday.

When she asked whether teachers were being taught CRT, the West Chester school board president Chris McCune told her that her speaking time was up.

IRANIAN IMMIGRANT CUT OFF AT BOARD MEETING FOR SLAMMING CRT: ‘MY MOTHERLAND WAS RAVAGED BY COMMUNISM’

“Anita, you’re at time,” he said. When she protested, he approached the podium, took away the mic and told her to leave.

“I was bullied and intimidated,” she told Fox News Thursday. “None of you guys [on the school board] did anything.”

She said police approached her from behind and escorted her out at the board president’s direction. To the officers’ credit, she said they were “very handsome” and polite. But the ordeal reminded her of a crackdown on personal-freedoms” target=”_blank”>individual liberty <in West Chester is calling for McCune to resign or attend anger management counseling for his behavior.

“This is a scary thing,” Edgarian said. “If you sat in that room and you didn’t think something majorly about being American has gone wrong, then you don’t have the same values that this country was built on.” 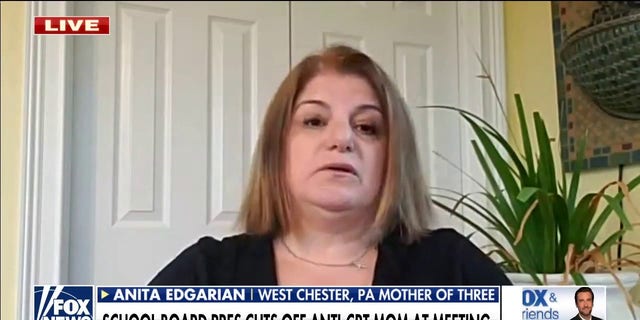 She said that if the board needs training, it might not be on critical race theory.

“You know what, they should go through human training,” she said.

Edgarian, an ethnic Armenian Christian who was born in Iran, said she was a teenager when the conflicts took place.

“I lived through the year or two of freedom that we had, and then after that, just the crackdowns and harassment and people being arrested and beaten,” she said. “So I have witnessed some scary things.”

She was almost arrested once, she said, because her head scarf fell off.

“I remember when the revolution happened — during the free time, they got to know all the outspoken intellectuals and just average citizens,” she said. “So they knew exactly who belonged to what for when they started the crackdown.”

By the time she turned 18, the borders had reopened, and her family fled. She arrived in the U.S. in 1984, put herself through college, got married and now has a 16-year-old son and twin 13-year-old girls in the West Chester School District, about 35 miles us-regions.

“I think I can put myself and my kids back into a private school, and financially, maybe I’ll make it work and I’ll get a second mortgage, whatever,” she said. “But this is not only about school. This is about the future of community that we’re building in West Chester.”

Whether or not her kids attend the district, other students still will, she said, and they’ll grow into adults with experiences shaped by their education.

And the future of the country rests on people like them.

Coming to America, Edgarian said she found the freedom that was a stark change from Iran’s oppressive theocracy – but she fears it’s growing fragile.

“[America] is a place that you can just be yourself,” she said. “If you decide, in your house, that you have a specific belief, you are not going to be scared to express it outside. And that’s what we are losing.”