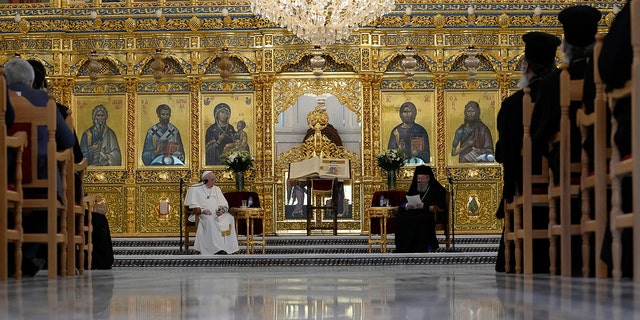 “Centuries of division and separation have made us assimilate, even involuntarily, hostility and prejudice with regard to one another, preconceptions often based on scarce and distorted information, and spread by an aggressive and polemical literature,” Francis said. “This too makes crooked the path of God, which is straight and directed to concord and unity.”

He said concrete joint works of charity, education and efforts to promote human dignity can help Catholics and Orthodox “rediscover our fraternity, and communion will mature by itself, to the praise of God.”

In a sign of that unity, two Orthodox bishops attended Francis’ Mass later Friday at Nicosia’s main sports stadium for Cyprus’ tiny Catholic community. The stadium, which seats 22,000, was less than half full and Francis eschewed his usual popemobile roundabout to greet the faithful before the Mass, presumably because the crowd only filled one set of stands.

There too, though, Francis urged a message of unity in a country lacerated by divisions, even among Catholics. “Healing takes place when we carry our pain together, when we face our problems together, when we listen and speak to one another,” he said.

On his part, Archbishop Chrysostomos said the Cypriot church enjoys “excellent relations” with all churches and has in recent years pursued dialogue with Muslim leaders in the Middle East – an effort he said was largely ruined by “extremist elements” who “inflamed passions.”

“We resolutely believe in the peaceful resolution of our differences whether those are ethnic or religious. And the only correct course is through a genuinely sincere dialogue,” he said.

Although Cyprus comprises a tiny part of the Eastern Orthodox community with around 800,000 faithful, Cypriot church leaders point to the Mediterranean island’s role as the “gateway” to Christianity’s westward expansion owing to its proximity to the faith’s birthplace.

Christianity first spread to Cyprus in 45 A.D., when the Apostle Paul converted the island’s Roman governor, Sergius Paulus, while on the first stop of his first mission to spread the faith. The Cypriot Church was itself said to have been founded by another apostle, Barnabas.

Francis has made Cyprus’ connection to the roots of Christianity a focal point of his visit, which ends Saturday when he heads to Greece. Cypriot Church leaders are keen to strengthen ties with the Holy See since minority Christian communities in nearby countries fear that their faith is under attack amid armed conflicts. 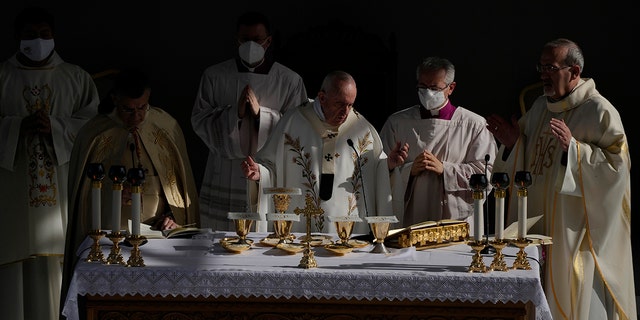 Cyprus itself carries the scars of war. The nation divided along ethnic lines in 1974 when Turkey invaded following a coup aimed at uniting the island with Greece. After the ethnic split, 170,000 Christians fled the breakaway Turkish Cypriot north, where churches, monasteries and other Christian monuments have been destroyed.

The destruction of Christian places of worship was among the key issues that Chrysostomos raised with Francis in hopes that the pontiff’s political muscle will help reignite stalled talks to reunify Cyprus and help repatriate looted religious works of art including icons, frescoes and mosaics.

Chrysostomos appealed to the pontiff to personally intercede and help restore “respect for our cultural heritage” and “Christian culture, which today are brutally violated by Turkey.”

The archbishop cited the example of Francis’ predecessor, Pope Benedict XVI, who mediated with the German government to bring back 500 religious items that Turkish antiquities smugglers had spirited away to Munich.

Upon his arrival on Thursday, Francis urged Greek Cypriots and Turkish Cypriots to resume the talks, saying threats and shows of force only prolong the “terrible laceration” the island’s people have endured for nearly a half-century.

“Let us nurture hope by the power of gestures, rather than by gestures of power,” Francis told Cypriot President Nicos Anastasiades and other government leaders at the presidential palace, located in the internally recognized, Greek Cypriot-led south. 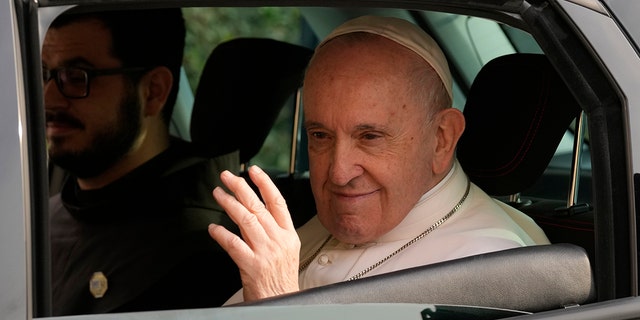 Prospects for unifying the island have rarely been as bleak as they are now. Turkish Cypriots, under their newly elected leader Ersin Tatar, changed their prerequisites for peace and demanded recognition of a separate state before any deal can even be discussed.

Previously both sides had agreed — with a United Nations Security Council endorsement — that any deal would involve establishing a two-zone federation, with a Turkish Cypriot zone in the north, a Greek Cypriot one in the south and a single federal government regulating core ministries, including defense and foreign affairs.

Acknowledging the stall in talks and the continuing suffering of Christians unable to return to their former homes in the majority Muslim north, Francis encouraged an initiative of the island’s Christian and Muslim faith leaders to promote reconciliation.

“Times that seem least favorable, when dialogue languishes, can be the very times that prepare for peace,” the pontiff said.

Share
Facebook
Twitter
Pinterest
WhatsApp
Previous articleChase Elliott named NASCAR's most popular driver, but what's up with that hat?
Next articleTest drive: The 2022 Ford Maverick Hybrid is a cheap little truck … in a good way