Pope Francis had a fever 3 days after intestinal surgery

The Vatican’s daily update said Francis was continuing to eat and move around unassisted, and had even sent his greetings to young cancer patients at Rome’s Gemelli Polyclinic hospital. 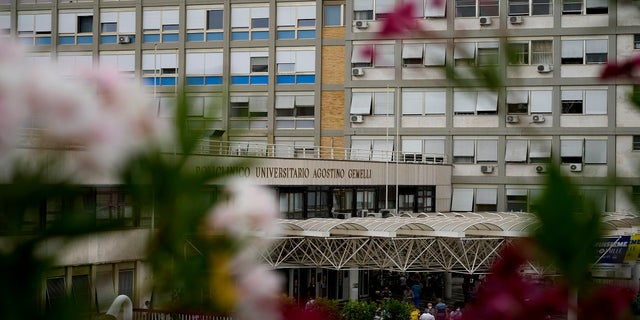 A view of the Agostino Gemelli Polyclinic in Rome, where Pope Francis is getting treatment. (AP)

“This morning he underwent routine and microbiological examinations, and a chest and abdomen scan, which proved negative,” the statement said.

Francis, 84, had half of his colon removed Sunday because of what the Vatican says was a “severe” narrowing of the large intestine. He is expected to stay at Gemelli, which has a special suite reserved for popes, through the week assuming there are no complications.

Doctors have said a fever could indicate evidence of an infection or other post-operative complications, though the Vatican statement stressed that the episode was temporary and that Francis’ treatment was progressing as planned.

Pope Francis waves to the crowd as he arrives to recite the Angelus noon prayer from the window of his studio overlooking St. Peter’s Square, at the Vatican, on July 4. (AP)

The statement said Francis’ recovery is continuing as planned and that “at this particular moment, he looks toward all those who suffer, expressing his closeness to the sick, especially those most in need of care.”

Francis has enjoyed relatively robust health, though he lost the upper part of one lung in his youth because of an infection. He also suffers from sciatica, or nerve pain, that makes him walk with a pronounced limp.