She told the cast it was “really marvelous you’ve been able to carry on” during the pandemic, and took time to chat to backstage staff including writers, camera operators, set designers, and sound engineers. 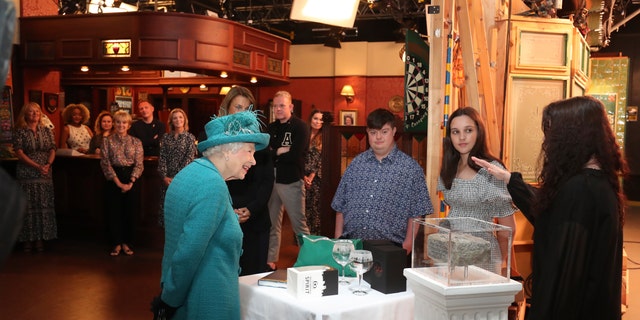 The show, which focuses on the lives of residents of the fictional northern English town of Weatherfield, is the world’s longest-running drama series.

Actress Kate Spencer warned the queen the set’s cobblestones were hard to walk on in heels, to which the monarch replied: “No, I know. I’ve been told. Probably better not.”

Actor Bill Roache, who has played Ken Barlow for decades since the soap’s early days, said the royal visit was a “wonderful bit of icing on the cake.”

“She just smiles. She listens, she always has and she loves to be made to laugh,” Roache said. “I’ve been lucky to meet her quite a few times and she’s always charming, and a laugh is never far away.”