Kleinbaum is the spouse of American Federation of Teachers president Randi Weingarten.

“A person’s sexual preferences should be a private matter, and certainly irrelevant to prayer. Kleinbaum, by contrast, leads a congregation that insists ‘LGBTQ’ is a matter of identity,” Rabbi Yaakov Menken, the managing director at the Coalition for Jewish Values (CJV), told Fox News on Thursday, ahead of Biden’s Friday announcement. “At a time when religious people are persecuted worldwide for their personal, sincere beliefs that marriage is between a man and a woman, and gender is permanent, biological, and determined at conception, placing Kleinbaum on a commission devoted to ensuring religious freedom sends precisely the wrong message and could hardly be more counter-productive.”

Critics have said Biden’s championing of LGBTQ issues has come at the expense of religious freedom concerns. Under Biden, the Department of Health and Human Services fought to resurrect a federal mandate forcing Roman Catholic hospitals and doctors to perform transgender surgery after a court ruled in favor of the Catholic health providers.

“It is troubling that this administration is going after religious doctors, hospitals, and nuns. We saw it with the Little Sisters of the Poor, when the government tried to force them to provide contraceptives and abortifacients, and now this administration is trying to do the same thing with controversial gender transition procedures,” Luke Goodrich, a vice president and senior counsel at the religious law firm Becket, said after HHS appealed the decision in April. 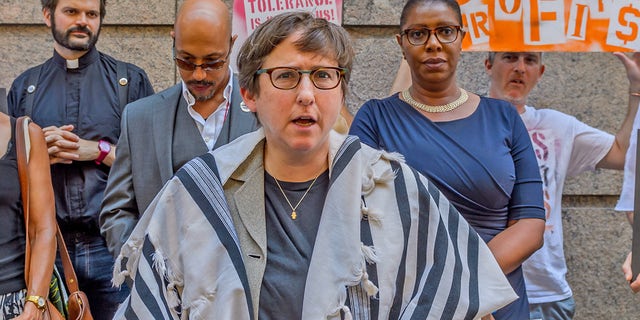 Biden has long championed the Equality Act, which critics say weakens religious freedom protections in the Religious Freedom Restoration Act of 1993, a landmark bill for which Biden himself voted as a senator.

“The misleadingly named Equality Act is an anti-freedom bill that empowers federal government to enforce conformity by punishing disagreement on [sexual orientation and gender identity],” Emilie Kao, then the director of the DeVos Center for Religion and Civil Society at the Heritage Foundation, warned in 2019.

In his announcement on Kleinbaum, Biden praised the rabbi as “a powerful voice in the movement for equality and justice for people of all sexual orientations, gender identities, and expressions.” He also noted that Kleinbaum has served on New York City Mayor Bill de Blasio’s Faith-Based Advisory Council.