Ryan Blaney took the lead from William Byron on a late restart and bobbed and weaved his way across the final seven laps to win at Michigan International Speedway. 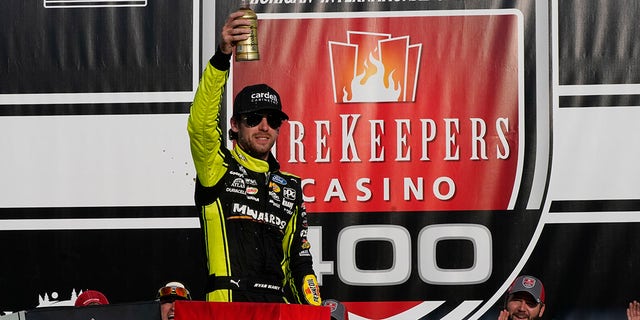 Blaney edged Byron by 0.077 seconds — the closest finish on the two-mile track since electronic scoring began. He has two victories this season and six overall.

Harvick won thee last three races and four of five at the track. The consolation prize was wrapping up the 15th spot in the 16-car playoff that begins in two weeks.

Chase Elliott beat his teammate, points leader Larson, to the finish line at the end of the first stage. Austin Dillon added some badly needed stage points in third. Dillon started the day in 17th, the wrong side of the cut line.

But Dillon’s day ended with the No. 3 Chevrolet slamming into the outside wall and into the air while racing side by side with Brad Keselowski at the end of the second stage.

Erik Jones told reporters Sunday he signed a contract extension this weekend to stay with Richard Petty Motorsports next season.

Jones didn’t divulge terms of the deal, which keeps him in the No. 43 Chevrolet. The announcement comes during a busy week in which he threw the first pitch at a Detroit Tigers game, stared a new charitable foundation and made an appearance for Chevy in Detroit.

Denny Hamlin said he’s moved on from last week’s tangle with Chase Briscoe at Indianapolis. Briscoe spun out the No. 11 Toyota with less than two laps left — and after Briscoe’s team had been told he would be penalized for cutting off the second turn by driving through the grass.

They first spoke on pit road then engaged in a Twitter spat when Briscoe’s radio transmissions were broadcast. It appeared to show the team was aware of the penalty before the contact. Briscoe then urged Hamlin to call him.

“We talked,” Hamlin said. “We talked on pit road and we talked after that, so yeah, I’m good. He can’t go back and change it. Would we do things differently next time? Probably. It was a bummer for me, yeah. I had as much at stake as he did.”

Hamlin hasn’t won yet this season but has clinched a playoff spot. Briscoe can make the playoffs with a win.

Bubba Wallace drives the No. 23 Toyota for basketball Hall of Famer Michael Jordan but it hasn’t kept him from meeting other NBA players. On Sunday, Wallace and Detroit Pistons forward Saddiq Bey exchanged jerseys.

Bey was born in Charlotte, North Carolina, and grew up watching Cup races though he never attended one.

Former Pistons star Ben Wallace, a 2021 Hall of Fame inductee, showed up for Saturday’s NASCAR Xfinity Series race. But it might not have been easiest sell to Jordan.

“I think it’s great for us to get more athletes that are interested in our sport — the NBA, the NFL, whatever it is to get them talking about it to bring our sport up where we need to be in urban areas, more diversity, ” Wallace said. “I know I can get some free tickets to Pistons game now although I did tell him it’s a little weird because of the long rival history between M.J. and Chicago with the Pistons.”

Share
Facebook
Twitter
Pinterest
WhatsApp
Previous articleBiden should 'step down in shame' for leaving Americans behind in Afghanistan: Lisa Boothe
Next articleBiden admin quickly processes migrants at border but can't do the same with trapped Afghan interpreters