wild-nature” target=”_blank”>Tasmanian devils< mainland for the first time in more than 3,000 years.

There are just around 25,000 devils left in the Tasmanian wild today and the species is listed as endangered on the united-nations” target=”_blank”>United Nations’< and conservationist Jeff Corwin has been to Tasmania 20 to 30 times over the years in his career and worked extensively with Tasmanian devils.

Speaking with Fox News on Friday, he called the news “a glimmer of hope” in a world dealing with “a lot of environment” target=”_blank”>environmental<,” he said. “So, the three threats they face significantly: one is an internal threat, which is … a cancer” target=”_blank”>sarcoma< has ravaged the wild population.

Once called Sarcophilus satanicus, or “Satanic flesh-lover,” devils – known now as Sarcophilus harrisii – typically live for up to six years in the wild and males can weigh up to 30 pounds.

Corwin likened the devils’ plight to that of the endangered California condor, which is being slowly reintroduced into Pacific Northwest skies for the first time in nearly 100 years.

“It’s not all that different to the American California condors. You know, the California condor just a few decades ago was reduced to being nearly extinct in the wild. Now [there are] around 500-plus wild condors, but it’s a highly managed population. It requires a lot of micromanagement to ensure that they survive in the wild,” he said.

Nearly three billion animals were estimated to have been killed or displaced in the devastating wildfires of late 2019 and early 2020.

Corwin said the fires likely pushed 12 species to extinction and consumed hundreds of millions of acres of habitat, reducing one of Australia’s most important general by 90%.

Corwin said conservationists also need to take predators and invasive environmental competitors, and other factors like disease into account. 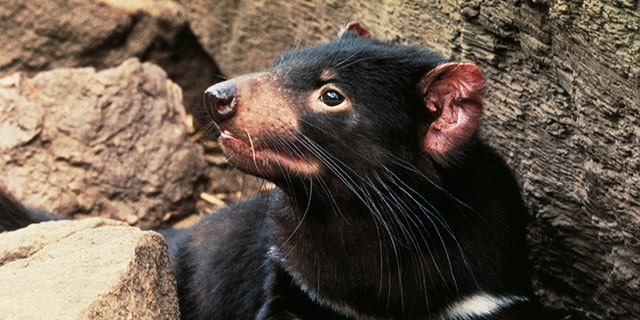 Preserving devils is extremely beneficial, he said, not only for the creatures but for other Australian ecosystems.

“When you protect a keystone species, you then inevitably ensure the survival of all those other life forms that are stitched and integrated into the ecosystem that that creature depends upon. So, by protecting the Tasmanian devil, that means we have to protect habitat. By protecting habitat, we protect other species,” Corwin explained.

If that is the case, there will be stronger natural resources available, the effects of a environment would be “softer” and there would be marked recreational and global-economy” target=”_blank”>economic benefits<.

The TV host pointed out that the Tasmanian devil gets a bad reputation as a “grumpy” creature that “dervishes and whirls around” its ecosystem.

In reality, he says, devils are very “sweet-natured” – the “ultimate example of the light that shines twice as bright half as long.”

“When you take something that is nearly gone and you bring it to that point of recovery, it’s evidence that there’s an opportunity to do that and to do that with other species versus kind of brushing the hands and saying, ‘Well, let’s wipe away that lost cause,'” Corwin said. “What we see is inspiration and motivation to apply that method of recovery to other species.”

People, he said, have a responsibility to ensure that devils shine for generations to come.