Nine years after an attempted terrorism” target=”_blank”>terrorist< non-profit Family Research Council (FRC) in washington-dc” target=”_blank”>Washington, D.C.< on the “hate map.” Former staffers have claimed that the SPLC uses the “hate group” label to exaggerate hate in a fundraising scheme. Critics say the SPLC brands mainstream conservative and Christian organizations “hate groups,” placing them on a list with truly hateful organizations like the Ku Klux Klan. A former SPLC spokesman even said, “Our aim in life is to destroy these groups, completely destroy them.”

While the spokesman clarified that he wanted to “mortally embarrass these groups” in a “political struggle,” one deranged man appears to have interpreted that mission more literally.

On Aug. 15, 2012, a man named Floyd Lee Corkins came into FRC armed with a 9 mm pistol, two ammunition clips of 15 rounds, the rounds in his gun and a box of 50 additional rounds. He also carried 15 individually-wrapped Chick-fil-A chicken sandwiches.

“He was not puffing things up when he told the investigators that he intended ‘to kill as many people as [he] could,’” Boykin, a former member of the Delta Force who was involved in the “Black Hawk Down” incident, told Fox News. 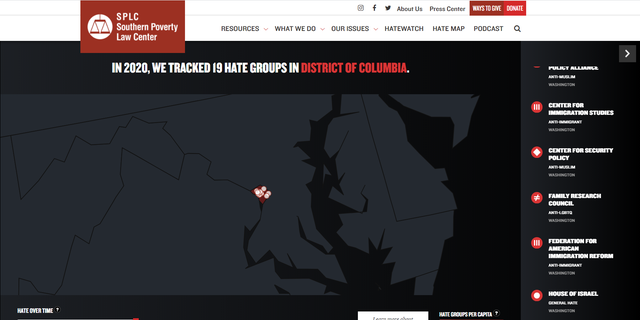 “He shot our building manager, Leo Johnson, shattering the major bones of his left arm. Even after taking a bullet, Leo heroically tackled the shooter, putting a stop to what would have been a mass murder,” Boykin recalled. “We will remain forever grateful for God’s intervention that day and for ‘Leo the hero.’”

Corkins later pleaded guilty to committing an act of terrorism. A judge sentenced him to 25 years in prison.

“But how did this would-be assassin fix on the Family Research Council as his target?” Boykin asked. “Corkins told FBI investigators that he used the website of the Southern Poverty Law Center to identify FRC on SPLC’s so-called ‘hate map.’”

“It is the intention of the SPLC to fix animus and hostility on the organizations it places on its hate map,” Boykin argued. He noted that the SPLC has added conservative and Christian organizations to the “hate map,” notably including Alliance Defending Freedom – a Christian law firm that has won multiple Supreme Court cases – in 2016. The SPLC even branded Dr. Ben Carson an “extremist,” only to retract the label while doubling down on criticizing his defense of traditional marriage.

Boykin also noted the racial discrimination and sexual harassment scandal that led to a devastating reckoning in 2019: the firing of co-founder Morris Dees, the resignation of President Richard Cohen and the promise of an internal review, the results of which have yet to become public.

In August 2019, the SPLC doubled down on its “hate group” accusation against FRC. The SPLC claimed that FRC engages in “demonizing rhetoric about the LGBTQ community.”

FRC responded by emphasizing that “every person, no matter who they are sexually attracted to, is created in the image and likeness of God” and therefore is “equal in value and dignity and must be treated with respect.” FRC does not believe that sexual attraction defines a person, so the idea that homosexual activity is sinful does not involve a degradation of dignity.

In 2017, the Christian ministry D. James Kennedy Ministries (DJKM) – which the SPLC also brands a “hate group” – sued the SPLC for defamation. Courts tossed the suit based on the actual-malice standard from the Supreme Court case New York Times v. Sullivan (1964), a standard that justices Clarence Thomas and Neil Gorsuch have urged the court to reconsider. On Friday, DJKM decided to appeal the case to the Supreme Court, specifically challenging that standard.

Boykin predicted that the SPLC would never remove FRC from its “hate map.”

“There has been no change to the hate map nor will there be. Today’s SPLC remains aggressively anti-Christian and morally bankrupt – both inside and out,” Boykin declared.

The SPLC did not respond to Fox News’ request for comment.