Stacey Abrams says she will be Georgia governor if voters can navigate Gov. Kemp’s 'voter suppression'

Democratic Georgia gubernatorial candidate Stacey Abrams argued that she will win her election on Tuesday if voters can “navigate” the alleged voter suppression systems installed in her state by her opponent Gov. Brian Kemp, R-Ga.

She spent a good portion of her interview with MSNBC anchor Ali Velshi on Saturday complaining about Georgia Republicans’ supposed voter suppression initiatives and attempts to “game the system” to stay in power next election day, despite record early voting turnout across the state.

The conversation began with the host bringing up polling which has Abrams “trailing Gov. Kemp by double digits.” Though he mentioned how some polling experts claim that the race is tighter than it seems. 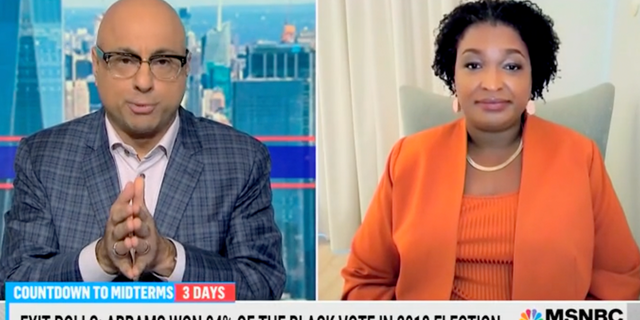 Georgia gubernatorial candidate Stacey Abrams said she would win the election next Tuesday if voters can navigate her opponents voter suppression tactics.
(Screenshot/MSNBC)

He asked Abrams what she thought of the state of the race. She replied that she was confident she’d win, provided her voters can get through the voter suppression tactics that she claimed were being employed by the party in power.

Abrams stated, “And while the polls are always going to tell the story you want to see, what we know is that the untold story is that this is a tight race, it is neck and neck, and we believe that we are on a path to victory if we can get all our voters turned out and if they can navigate the difficulties put in place by Brian Kemp and Brad Raffensperger.”

She claimed that the incumbent governor and the Georgia Secretary of State have moved “to not only game the system, but to suppress voting in the state of Georgia.”

Abrams famously accused Kemp of suppressing the vote to win the governorship over her in 2018, refusing to concede to the Republican.

He added, “For a lot of Americans, the imagery of voter suppression, like we were just showing, are pictures of Georgia, of long line-ups where it was made illegal to provide people with water or snacks as they vote, of registration things that are impediments to people voting.”

Velshi then asked Abrams, “How influential is that to people today? Are there Black voters, voters in general in Georgia who want to come out to vote just so that that stuff is reversed?”

Abrams replied, “It is exactly one of the reasons that people are turning out.” 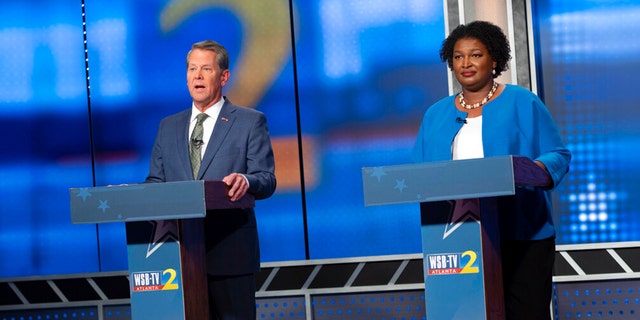 She continued, claiming that early voting turnout in Georgia is high because people “understand that Brian Kemp and Brad Raffensperger put barriers in place, that they’re going to be denied access to food and water in lines that in years past have stretched up to four, eight hours. They know that there have been more difficulties put in place for absentee ballots.”

She also mentioned voter suppression from “White supremacist groups and hard right-wing groups” who “have been challenging people’s right to vote.” She added, “Up to 75,000 people have had their right to vote challenged because of the law passed by Brian Kemp. And he did so because he was frustrated by the results.”