Eleanor Roosevelt, who holds the distinction of longest-serving first lady and who helped guide the American people through the Great Depression and World War II, died after a two-year battle with baffling illnesses on this day in history, Nov. 7, 1962.

“A shy, awkward child, starved for recognition and love, Eleanor Roosevelt grew into a woman with great sensitivity to the under-privileged of all creeds, races, and nations,” writes WhiteHouse.gov of the first lady who inhabited the executive mansion for 12 years (1933-45).

Born Anna Eleanor Roosevelt in New York City in 1884, she was orphaned at age 9, following the death of her mother, Anna Hall, and then her father, Elliott Roosevelt, the younger brother of President Theodore Roosevelt. 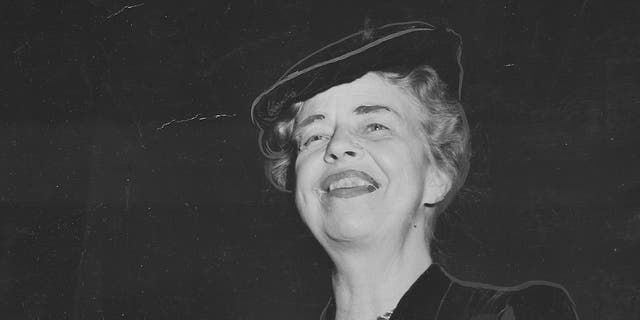 Mrs. Roosevelt was raised amid privilege by her grandmother, Valentine G. Hall, in the Hudson River community of Tivoli, New York.

She married her distant cousin and future president, Franklin Delano Roosevelt, of nearby Hyde Park, in 1905.

She devoted her first years of their marriage to family life, giving birth to six children by 1916.

CHRISTMAS IN NOVEMBER? PEOPLE REVEAL THE MOST AWESOME LIFE ‘GIFTS’ AHEAD OF THE HOLIDAYS

“However, with American entry in World War I, she became active in the American Red Cross and in volunteer work in Navy hospitals,” reports the Franklin Delano Roosevelt Presidential Library and Museum.

“In 1921, Franklin Roosevelt was stricken with polio, causing Mrs. Roosevelt to become increasingly active in politics in part to help him maintain his interests but also to assert her own personality and goals.”

Her international profile rose with the election of FDR as president in 1933 and then America’s entry into World War II in 1941. 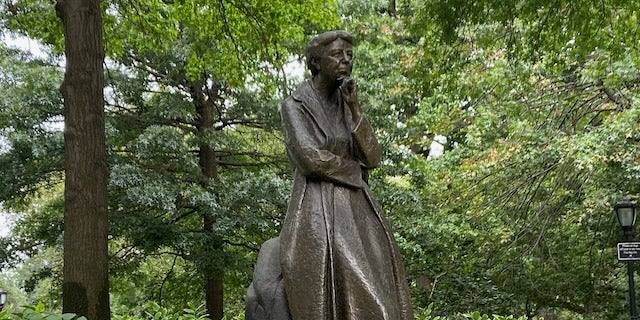 “She transformed the role of first lady,” writes WhiteHouse.gov.

“She never shirked official entertaining; she greeted thousands with charming friendliness. She also broke precedent to hold press conferences, travel to all parts of the country, give lectures and radio broadcasts, and express her opinions candidly in a daily syndicated newspaper column, ‘My Day.’”

She chronicled her international exploits during global depression, world war and the United States’ emergence as a global superpower in the column from 1935 until near her death in 1962.

“I often wonder if, in any way, we who are still on this earth could somehow tune ourselves better to the universe and get more real direction from those who must know so much more in the world beyond,” she wrote in her column in April 1950, mourning the five-year anniversary of the death of President Roosevelt.

“All we can do is to continue as best we can from day to day and hope that we follow the right path.”

She continued to play an influential role in global affairs after her life in the White House. Most notably, she was an early leader in the emergence of the United Nations after World War II. 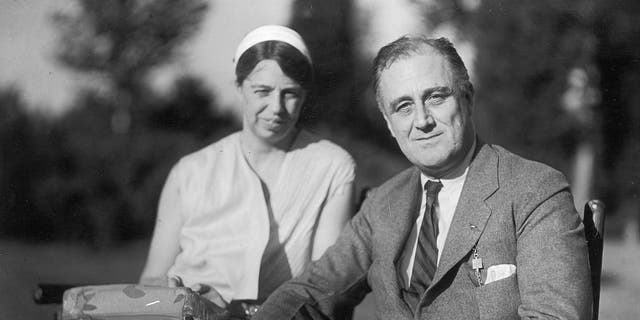 Portrait of President Franklin D. Roosevelt and wife Eleanor Roosevelt seated outside in the garden, circa 1930s. The fifth cousins married in 1905 and resided in the White House from 1933 to 1945.
(Photo by Fotosearch/Getty Images)

She served as the first chairperson of the organization’s Commission on Human Rights and led the drafting of its Universal Declaration of Human Rights, published in 1948.

Roosevelt served as the first chairperson of the United Nations Commission on Human Rights.

The former first lady began to suffer serious illness in 1960, which often left her bedridden by fatigue.

Her death is attributed to aplastic anemia, tuberculosis and heart failure. But the various ailments in her final years confounded the medical community at the time. 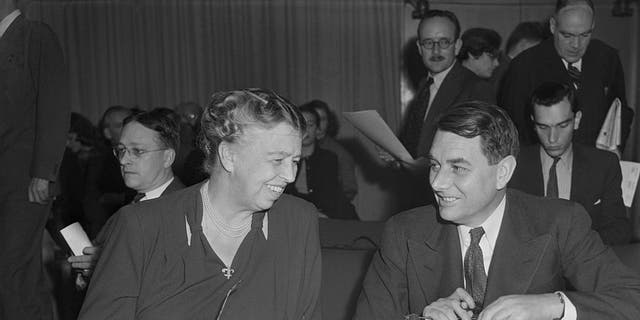 Eleanor Roosevelt, member of the U.S. delegation to the U.N., chats with Mr. E. Davies, M.P. and member of the British delegation, during the meeting of the Social, Cultural and Humanitarian Committee of the U.N. In an address before the 57-nation committee, Mrs. Roosevelt accused the Soviet states of "poisoning the wells of international friendship" with a flood of propaganda against the U.S.
(Getty Images)

“The chief problem was that none of her doctors knew what was causing her rare blood disorder. Given this was more than 50 years ago, the treatment options were rather limited.”

Determined not to die in the hospital, Roosevelt defied doctors’ orders while still able and discharged herself on October 18. She returned to her home at 55 East 74th St. in Manhattan.

“Her prognosis was poor — by Nov. 4 she appeared to have suffered from a cerebrovascular accident or stroke,” writes PBS. “Three days later, she died in her own bed.”

“She had become not only the wife and widow of a towering president but a noble personality in herself.”

She is buried next to her husband in Hyde Park, New York.

She is honored today, among many other tributes, with the Eleanor Roosevelt Memorial on Riverside Park on West 72nd Street in the Upper West Side of Manhattan, a short distance from where she last resided and died on Manhattan’s Upper East Side.

“Again and again, she was voted ‘the world’s most admired woman,’ in international polls,” The New York Times wrote in its obituary of her.

“When she entered the halls of the United Nations, representatives from all countries rose to honor her. She had become not only the wife and widow of a towering president but a noble personality in herself.”