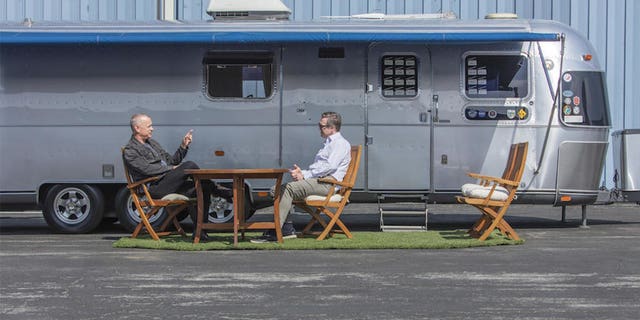 The pristine 1980 Toyota FJ40 Land Cruiser sold for $123,200 at Bonham’s Quail Lodge Auction was modified with a GM V8 and equipped with leather Porsche seats and an upgraded suspension while the 1992 Airstream sold at the same event for $235,200.

Hanks had the Land Cruiser registered in Idaho, where he owns property, and used the custom Airstream on set at 18 filming locations over the years.

“I didn’t want anything built-in, other than the kitchen and bathroom, so it had only a desk and cupboard in the back, a futon platform on the floor, and room for a small table and chairs,” Hanks wrote in the listing for the trailer.

The identity of the buyer or buyers hasn’t been revealed. If it is the same person and they’re planning to use them together, they’ll have to get the Toyota tested first because the original wasn’t rated to pull something as heavy as the Airstream, but might be able to swing it with the new V6.