Palin, who is now running for Congress, introduced Trump at a Monday night tele-rally after Mar-a-Lago was searched earlier in the day by agents who were allegedly searching for classified material.

“He has to witness and take that injustice that so many of us are so angry about all around him, especially today,” the former governor said. “And yet, look at what he’s doing, you guys, he’s spending the time with us, with Alaskans, and we love him for that.”

Trump briefly addressed the matter before moving on to discussing the Alaskan congressional race.

“Another day in paradise,” the former president said. “This was a strange day – you probably all read about it, but very important,” he added before continuing with his remarks.

Trump’s statement was noticeably cooler than his condemnation of the search earlier that day when he released a statement. 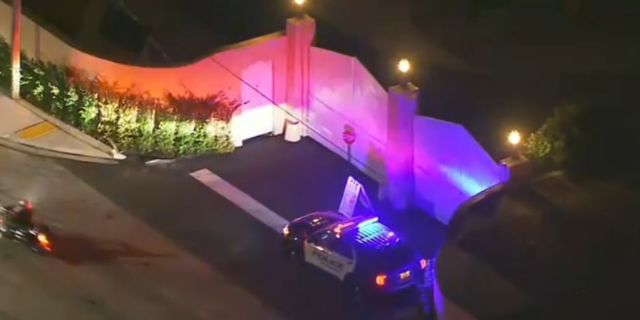 Aerial footage of police stationed outside of Mar-a-Lago during FBI raid.
(WFOR)

“It is prosecutorial misconduct, the weaponization of the Justice System, and an attack by Radical Left Democrats who desperately don’t want me to run for President in 2024,” Trump asserted. “Especially based on recent polls, and who will likewise do anything to stop Republicans and Conservatives in the upcoming Midterm Elections.”

Sources tell Fox News that the raid concerns materials that the former president allegedly took to the Florida estate after he left office. The National Archives and Records Administration told the DOJ that classified material was found in over a dozen boxes at Mar-a-Lago.

Such removal of documents would be prohibited by federal law – and a source told Fox News that FBI agents scoured every safe and box for the alleged documents without even going through them on the premises.

“They were not being judicious about what they took,” the source said.