Ukraine marks Orthodox Easter with prayers for those trapped

The sun came out as Ukrainians marked religion in the capital, Kyiv, on Sunday with prayers for those fighting on the front lines and others trapped beyond them in places like Mariupol.

St. Volodymyr’s Cathedral in Kyiv was ringed by hundreds of worshipers with baskets to be blessed. Inside, a woman clutched the arm of a soldier, turning briefly to kiss his elbow. Other soldiers prayed, holding handfuls of candles, then crossed themselves. An older woman slowly made her way through the crowd and stands of flickering candles. One young woman held daffodils.

Outside the cathedral, a soldier who gave only his first name, Mykhailo, used his helmet as an religion” target=”_blank”>Easter< andconflicts, some worshippers hoped the holy day could inspire gestures of peacemaking. “The church can help,” said one man who gave only his first name, Serhii, as he came to a church in Kyiv under the Moscow Patriarchate.

He and others brought baskets to be blessed by priests for Easter with flicks of a brush sprinkling holy water over offerings of home-dyed eggs, lighted candles and even bottles of Jack Daniels.

Residents of rural villages battered by the war approached the holiday with some defiance.

“We’ll celebrate Easter no matter what, no matter much horror,” said Kateryna Lazarenko, 68, in the northern village of Ivanivka outside Chernihiv, where ruined Russian tanks still littered the roads.

“How do I feel? Very nervous, everyone is nervous,” said another resident, Olena Koptyl, as she prepared her Easter bread. “The Easter holiday doesn’t bring any joy. I’m crying a lot. We cannot forget how we lived.”

She and 12 others spent a month sheltering from Russian soldiers in the basement of her home before the soldiers withdrew. 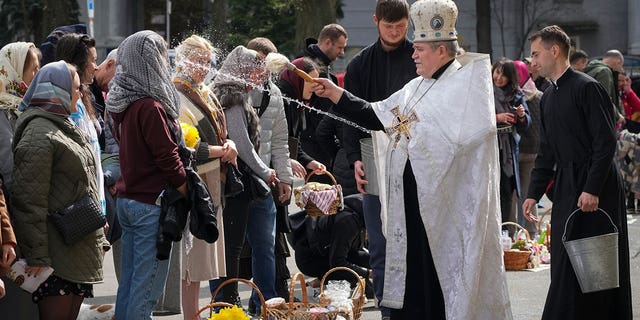 Ukraine on Sunday prepared for the first high-level U.S. trip to Kyiv since before the war began Feb. 24 after Zelenskyy announced he would meet with Secretary of State Antony Blinken and Defense Secretary Lloyd Austin.

Zelenskyy in a news conference Saturday night gave few details but said he expected results, “not just presents or some kind of cakes, we are expecting specific things and specific weapons.”