Fairfax County Public Schools also backed away from the group when asked about the link Friday.

“This content was posted in error by the school and has since been removed from the website,” a district spokesperson told Fox News.

However, as of Friday evening, the link still appeared and still worked.

The spokesperson did not respond to a follow-up question about whether the error occurred as a result of the Biden administration’s erroneous decision to include its own link to the ATN, which has since been removed.

The Biden administration’s guidance, which went out to about 13,000 school districts nationwide in April, included a link to the Abolitionist Teaching Network.

“FCPS needs adult supervision, and fast,” said Nicole Neily, president of Parents Defending Education, “It’s a sign things have gone off the rails when the people running the system are recommending resources that advocate burning down the system.”

The grassroots group recently exposed a Fairfax PTA leader who appeared to suggest critics of critical race theory should “die.”

In that video, Fairfax NAACP member and former PTA Vice President of Training Michelle Leete prompted cheers at a left-wing rally with her remarks – including from some county Democratic officials.

According to the Washington Post, Leete said she meant to wish death on the various “ideals” from conservative parents, not the parents themselves. But blowback over the incendiary speech resulted in her resignation Saturday.

“Parents here in Fairfax County are fed up with having critical race theory forced on their students,” Ed McGovern, a Republican candidate for Virginia’s House of Delegates, told Fox News Friday. “It’s sad and unfortunate Virginia schools and the Biden administration are promoting a group that wants our students to fear and hate their peers. Apologizing isn’t enough; we need to completely end critical race theory before the start of next school year and never allow Abolitionist Teaching Network near our kids.” 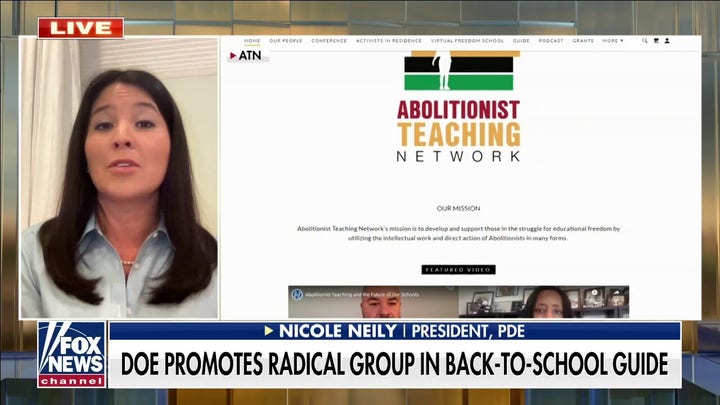 The Abolitionist Teaching Network launched on July 6, 2020 with the stated goal “to develop and support those in the struggle for educational freedom by utilizing the intellectual work and direct action of Abolitionists in many forms.”

While the group’s philosophy differs from critical race theory, both claim that the U.S. suffers from systemic racism and call for a dismantling of existing structures and perceived White privilege.

And its cornerstone program, called Activists in Residence, pays professional agitators $30,000 per year, working 20 hours per week, to lead “abolitionist educational organizing in their respective cities” and further the group’s agenda, according to its website.

In its “Guide for Racial Justice & Abolitionist Social and Emotional Learning” handbook, which the Biden administration has removed from its reopening guidance, the group calls on students and educators to “disrupt Whiteness and other forms of oppression” and accuses the U.S. educational system of the “spirit murder” of “Black, Brown and Indigenous children.”

The Biden administration disavowed the group earlier this week.

“The Department does not endorse the recommendations of this group, nor do they reflect our policy positions,” the Department of Education said in a statement Wednesday. “It was an error in a lengthy document to include this citation.”