Kravitz, 32, donned a sheer, crystal Saint Laurent by Anthony Vaccarello slip dress to the star-studded event Monday night. She wore only a silver thong underneath, showing off her full body.

“I don’t understand why they go practically naked,” a social media user said, according to People magazine. “She’s gorgeous. Why does she feel the need to wear a dress like this?”

“Being uncomfortable with the human body is colonization / brainwashing,” Kravitz responded. 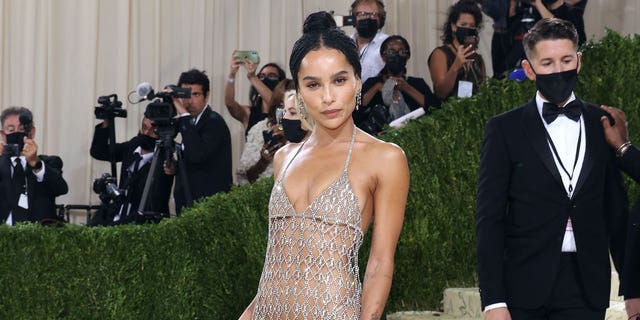 Zoe Kravitz attends the 2021 Met Gala benefit ‘In America: A Lexicon of Fashion’ at Metropolitan Museum of Art on September 13, 2021 in New York City.
(Photo by Taylor Hill/WireImage via Getty Images)

Kravitz attended the Met Gala with actor Channing Tatum. Although the actors showed up separately to the event, they were photographed holding hands while leaving.

The two were first publicly linked in August as they were spotted enjoying a bike ride in NYC. However, rumors had initially spread on social media back in January.

Kravitz and Tatum reportedly “continue to be inseparable” as their romance heats up.

“They looked very happy,” a source told People magazine. “They have this cute and flirty chemistry.”

Share
Facebook
Twitter
Pinterest
WhatsApp
Previous articleCapitol Hill frustration with State Dept bubbles over: 'The DMV-ification of a hostage crisis'
Next articleThird plane out of Afghanistan with Americans on board lands in Doha
Fox Newshttp://iktodaypk.com