In Ohio, the Columbus Zoo and Aquarium is taking time to observe its various bird inhabitants before any moves are made.

“We are currently monitoring a strain of avian influenza in wild birds,” a spokesperson for the zoo wrote in an email to Fox News Digital. “It does not pose a threat to humans. However, out of an abundance of caution for some of the Zoo birds in our care, we have temporarily closed some bird habitats while we proactively monitor and evaluate the situation.”

The Columbus Zoo has closed a number of its bird habitats, so it can keep an eye on its bird residents, which have been sectioned off by “zoo region.”

The following zoo regions are closed with their respective avian exhibits – North America, Heart of Africa, Asia Quest, Shores and Aquarium, Australia and the Islands and Congo Expedition.

Over in Missouri, the Kansas City Zoo is taking similar steps. The zoo has relocated birds from outdoor habitats to “behind-the-scene areas” in order to shield them from potentially infected wild waterfowl, like ducks and geese.

“Like other zoos and animal care facilities in our region, the Kansas City Zoo has been closely monitoring the recent outbreak of avian influenza, a viral respiratory disease of birds,” the zoo wrote in a press release. “The virus has now been documented in several states, including Missouri, so the Zoo is taking immediate steps to protect the birds in our care from this disease.”

Animal handlers at the Kansas City Zoo will wear personal protective equipment to “mitigate risk to the birds” they care for along with veterinary health monitoring.

“Though we don’t have a specific timeline for how long this will endure, we hope that all birds will be back in their outdoor habitats this spring,” the zoo concluded.

The Chicago Zoological Society and the Brookfield Zoo in Brookfield, Illinois, is also taking action to protect its bird population from the outbreak.

“Due to recent avian influenza cases in Illinois, several of Brookfield Zoo’s bird species, including Guinea fowl, peafowl, ravens, and Cape Barren geese, are being kept in holding areas to minimize the potential for transmission from wild birds to these more susceptible species,” said Dr. Sathya Chinnadurai, senior vice president of animal health and welfare for the Chicago Zoological Society.

He continued, “Our veterinary and animal care staff is closely monitoring the situation and is in communication with the Illinois State Veterinarian for guidance.”

Meanwhile, the Pittsburgh Zoo & PPG Aquarium adjusted its bird exhibits in late March in response to avian flu infection data it had been tracking throughout the eastern U.S.

Confirmed cases were within 125 miles of Pittsburgh when the zoo increased its “biosecurity measures” on March 31, and moved resident birds.

Zoo visitors can view flamingos from their indoor habitat and penguins from their PPG Aquarium habitat. Ostriches, chickens and owls are being “safely housed in barn areas” away from public access, however.

“The safety of our animals and our staff remains our highest priority,” said Dr. Jeremy Goodman, president and CEO at Pittsburgh Zoo & PPG Aquarium, in a statement.

He added, “Many of the additional precautions for animal care staff have been, and in some cases, continue to be used due to the COVID-19 pandemic.”

TODAY’S VETERINARIAN SHORTAGE: HOW IT COULD AFFECT YOUR DOG OR CAT

The Pittsburgh Zoo & PPG Aquarium noted that the avian flu has the “potential to spread to other species, including mammals,” but the risk is considered low. Despite the low risk of cross-species transmission, the zoo urged guests to avoid feeding or interacting with wild birds and be especially careful if they own a pet bird or poultry. 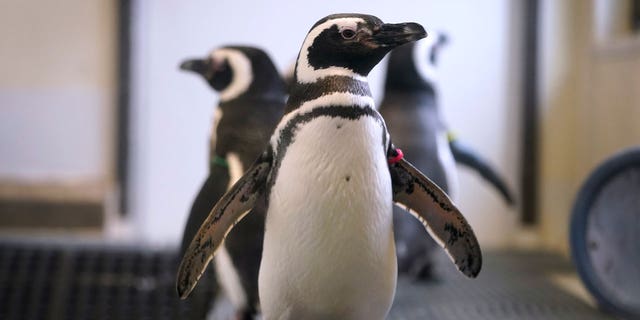 Three magellan penguins stand in their enclosure at the Blank Park Zoo, Tuesday, April 5, 2022, in Des Moines, Iowa. Zoos across North America are moving their birds indoors and away from people and wildlife as they try to protect them from the avian influenza.
(AP Photo/Charlie Neibergall)

Avian flu strains rarely infect humans, according to the CDC. There have only been four confirmed avian-to-human flu infections found in the U.S. and those infections were considered low pathogenic. The CDC hasn’t found any evidence of a human-to-human spread of the avian flu.

Even still, millions of birds are being culled to stamp out infection, especially in livestock and poultry industries.