AOC backs court-packing push: 'We should be expanding the court'

“I do I think that we should be expanding the court,” Ocasio-Cortez said Thursday when asked by Fox News about new court-packing legislation.

The second-term lawmaker raised concerns about how Sen. Mitch McConnell, R-Ky., “politicized” court vacancies and questioned how just nine people “can overturn laws that hundreds and thousands of legislators, advocates and policymakers drew consensus on.”

“How much does the current structure benefit us?” Ocasio-Cortez said. “And I don’t think it does.” 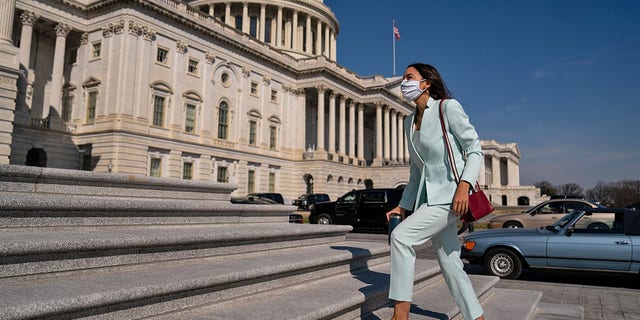 It’s a two-page bill that would increase the number of justices on the court from nine to 13, setting up an immediate opportunity for President Biden to nominate four new justices to be confirmed in the Democratic-led Senate.

Ocasio-Cortez said she’s still looking at the exact proposal, but “if the top line is expansion of the court” then “yes” she backs the bill.

The New York progressive on Thursday retweeted Jones’ video promoting his legislation on court expansion where he links the Supreme Court “actively dismantling our democracy” to the Jan. 6 riot at the Capitol.

The legislation has long-odds of passing Congress because unless Democrats abolish the filibuster, it would require 60 votes for passage in the Senate. And Democratic leaders, including Rep. Nancy Pelosi, have not embraced the bill.

Biden himself has been cool to court-packing and has only endorsed setting up a 36-member bipartisan commission to study court reforms. White House press secretary Jen Psaki said Thursday Biden is awaiting the recommendations from the newly formed court commission before taking a stance.