Biden says US, Japan 'committed to working together' on challenges from China, North Korea

President Biden on Friday said he and Japanese Prime Minister Yoshihide Suga affirmed their “ironclad support” of the U.S.-Japanese alliance, saying the two nations committed to take on challenges posed by China and North Korea together to “ensure a future of a free and open Indo-Pacific.”

Suga is the first foreign leader to meet in person with Biden, signaling strengthening ties between the United States and Japan amid diplomatic tensions with China—as intelligence officials warn that Beijing poses one of the greatest long-term threats to U.S. national security.

“The commitment to meet in person is indicative of the importance and the value we both place on this relationship between Japan and the United States,” Biden said Friday during a joint press conference in the White House Rose Garden.

The president said that the two had a “very productive discussion” Friday, discussing their commitment to cooperate on shared challenges.

“We affirmed our ironclad support for the U.S.-Japanese alliance and for our shared security,” Biden said. “We committed to working together to take on challenges from China, the East China Sea–South China Sea, North Korea and to ensure a future of a free and open Indo-Pacific.”

Biden said that Japan and the U.S. are “two strong democracies in the region and are committed to defending and advancing our shared values, including human rights and the rule of law.”

“We’re going to work together to prove that democracies can still compete and win in the 21st century, and still deliver for our people in the face of a rapidly changing world,” Biden said.

Suga, during the press conference, said the two leaders committed to a “global partnership for a new era,” which he said “strongly demonstrates our solidarity toward the realization of a free and open Indo-Pacific.”

The two leaders, on Friday, said they would work together to get the COVID-19 pandemic “under control,” ensure equitable access to vaccines, and focus on climate change and clean energy.

Biden also said that the U.S. and Japan will work together to “protect” new technologies, and “maintain and sharpen a competitive edge” based on “shared Democratic norms set by democracies—not autocracies”—in an apparent swipe at China.

Biden said that the United States and Japan will work together to promote “secure and reliable 5G networks,” a secure supply chain—specifically for semiconductors, and to drive joint research in artificial intelligence, genomics, quantum computing and more. 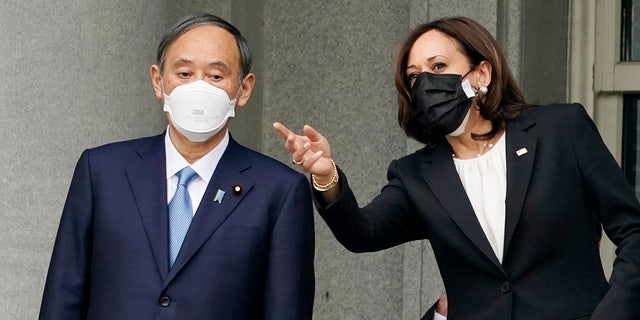 Japanese Prime Minister Yoshihide Suga meets Vice President Kamala Harris, Friday morning, April 16, 2021, on the balcony of the Eisenhower Executive Office Building on the White House campus in Washington. President Joe Biden will be welcoming Japan’s prime minister to the White House on Friday in his first face-to-face meeting with a foreign leader, a choice that reflects Biden’s emphasis on strengthening alliances to deal with a more assertive China and other global challenges. (AP Photo/Andrew Harnik)
(AP)

The Biden Administration and Japan have been working to strengthen technology supply chains, in a way to ensure U.S. and Japanese independence from unreliable partnerships with China—whose trade war with the U.S. coupled with the coronavirus pandemic has led to the crippling semiconductor chip shortages.

Japan is also expected to announce an investment in 5G cellular networks, boosting alternatives to China’s network, as part of that supply chain cooperation. Biden and Suga on Friday also discussed ramping up a new trade alliance to bolster semiconductor production.

The new supply chain agreement would ensure U.S. and Japanese independence from vulnerable regions like Taiwan and unreliable partnerships with China—whose trade war with the U.S. coupled with the coronavirus pandemic has led to the crippling semiconductor chip shortages.

The focus on the U.S. supply chain comes after the president in February signed an executive order demanding a 100-day review of supply chains in four areas—computer chips, large capacity batteries, pharmaceuticals, and critical minerals and rare earth materials.

Intelligence and national security officials, as well as lawmakers on both sides of the aisle, have warned that China poses a threat to the U.S. supply chain, but the executive order did not mention China but instead focuses on other vulnerabilities.

Suga, during the press conference on Friday, said that he and Biden discussed China’s “influence” in the Indo-Pacific, and said the two leaders “agreed to oppose any attempts to change the status quo by force.”

Before the press conference, the two met in the White House State Dining Room Friday, where Biden said the two nations have a “big agenda.”

“We are two important democracies in the Pacific region,” Biden said. “And our cooperation is vital, in my view, and I think in both our view, to meeting the challenges facing our nations and to ensuring that the future of the region remain free and prosperous.”

Suga, who succeeded former Prime Minister Shinzo Abe in September, after serving as his chief Cabinet secretary, said Friday that “freedom, democracy, human rights and the rule of law are universal values that make a difference that is prevalent in the Indo-Pacific.”

“This is the very foundation of prosperity and stability of the region and the globe,” Suga said, highlighting the “importance of such values,” while saying he wishes to “reaffirm” a strong U.S.-Japan alliance.

Suga also expressed a desire to focus on ways the U.S. and Japan can cooperate on a number of common challenges, including the COVID-19 pandemic and climate change.

Upon announcing the visit earlier this month, the White House said that it reflected the “importance” the administration places on its bilateral relationship with Japan, while Suga expressed his goal to build “a relationship of trust” with Biden.

Biden and Suga were set to discuss U.S. and Japan’s shared coordination and cooperation on China, as well as other regional security issues, including North Korea’s nuclear program.

As for China, the Biden Administration has called for a “new approach” to national security to “strengthen” the United States’ advantages and “prevail in strategic competition with China.”

The White House has warned that Beijing is “the only competitor” potentially capable of mounting a “challenge” to the international system.

In warning of China’s growing assertiveness, the White House underscored the importance of “democratic alliances,” like Japan.

The meeting comes after intelligence officials this week, like FBI Director Christopher Wray, testified that China poses the greatest threat to U.S. national security, notifying the Senate Intelligence Committee that the bureau opens a new investigation related to China “every 10 hours,” and confirming that the FBI has more than 2,000 active investigations tied to the Chinese government.