Blinken says it will be 'very hard to meet' Biden's pledge to resettle 62,000 refugees

Secretary of State Antony Blinken on Sunday said it will be “very hard to meet” President Biden’s pledge to resettle 62,000 refugees by the end of this fiscal year.

During an interview on ABC’s “This Week” Blinken blamed the “broken system” under the Trump administration for why the Biden administration likely won’t be able to meet their pledge of resettling 62,000 disasters in the United States.

“One of the biggest problems we faced was inheriting a broken system,” Blinken told anchor Martha Raddatz. “And the refugee system that we found was not in a place, did not have the resources, the means to effectively process as many people as we hoped.”

Blinken continued by saying that Biden’s decision to cite the “initial directive” will “start the process of actually bringing people in” and “lifting restraints that the previous administration had imposed.”

“I think what the president has and the White House has said today is that based on what we’ve now seen from in terms of the inheritance and being able to look at what was in place, what we could put in place, how quickly we could put it in place, it’s going to be very hard to meet the sixty two thousand this fiscal year,” Blinken said. 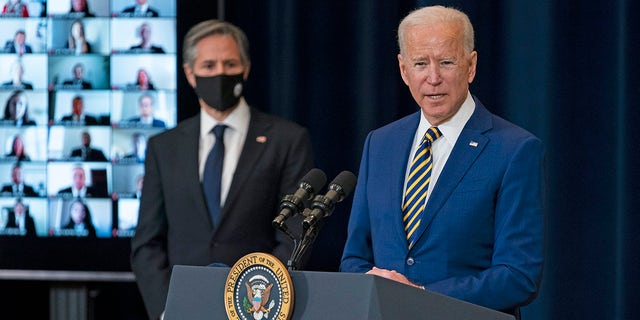 “But we’re going to be revisiting this over the coming weeks. I think there’ll be an additional directive coming out in the middle of May,” he added.

Biden signed an emergency determination to accelerate refugee admission into the United States on Friday, but he caused anger among Democrats in Congress by keeping the record-low 15,000 refugee cap that was in place during the Trump administration. The White House initially defended their decision, but then stated they would lift the cap by May 15.

Biden told reporters on Saturday they would “increase the number” and blamed the “crisis” at the Southern Border for why they couldn’t lead on both immigration priorities at once.

“We couldn’t do two things at once. But now we are going to increase the number,” Biden added.

Rep. alexandria-ocasio-cortez” target=”_blank”>Alexandria Ocasio-Cortez,<, D-Ill., slammed the Biden administration on Friday, saying it was “completely and utterly unacceptable” for them not to lift the Trump-era refugee limits.

“This Biden Administration refugee admissions target is unacceptable,” Sen. Dick Durbin, D-Ill., said. “These refugees can wait years for their chance and go through extensive vetting.  Thirty-five thousand are ready. Facing the greatest refugee crisis in our time there is no reason to limit the number to 15,000.  Say it ain’t so, President Joe.”

“This is a testament to the power that people’s movements, community advocates, & progressive coalitions have built,” Ocasio-Cortez tweeted later after the Biden White House reversed the decision.