“The purpose of these laws are nothing more than an attempt to silence the Black Lives Matter movement and other civil organizations by limiting the ability to protest,” the attorney, Aaron Carter Bates, said in a statement, according to the Orlando Sentinel. “The First Amendment is a pillar of American democracy, and the ‘anti-riot’ laws clearly strip Floridians of their freedom of speech and right to assemble.”

DESANTIS SENDING MESSAGE THAT PROTESTING IS OKAY, BUT RIOTING IS ‘UNACCEPTABLE’: FLORIDA SHERIFF

DeSantis signed the “anti-riot” bill into law this week. It increases penalties for crimes committed during riots and is aimed at “combating public disorder.” 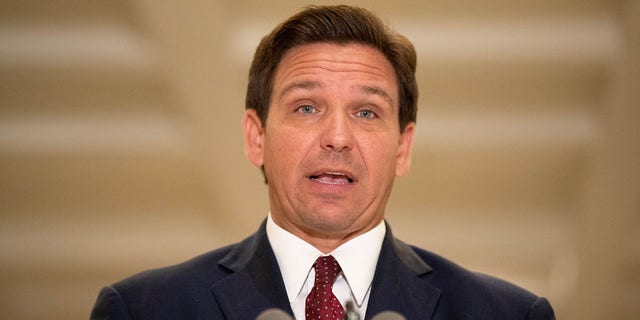 Florida’s Senate passed the bill last week 23-17. It was seen as a response to protests around the country stemming from police brutality against African Americans.

The law, which took effect immediately, grants civil legal immunity to people who drive through protesters blocking a road and allows authorities to hold arrested demonstrators from posting bail until after their first court date. The legislation increases the charge for battery on a police officer during a riot and adds language that could force local governments to justify a reduction in law enforcement budgets.

The law allows people to sue local governments over personal or property damages if they were determined to have interfered with law enforcement response during civil unrest. It also increases penalties for protesters who block roadways or deface public monuments and creates a new crime, “mob intimidation.”

“These statutes are unconstitutional on their face,” the lawsuit claims, according to the paper. “They target protected speech under the First Amendment [and] they are written with the intent of defining any such protest as a ‘riot’ or participation in such protest as ‘inciting a riot.’”

A spokesman for the governor told the Orlando Sentinel his office had not yet been served with the lawsuit, “but we will firmly defend the legal merits of [the bill], which protects businesses, supports law enforcement, and ensures punishment for those who cause violence in our communities.”

Meanwhile, an Orange County Sheriff’s Office spokesperson said “as it relates to Sheriff Mina, this lawsuit is without merit. … Accordingly, we intend to file a motion to dismiss.”