“The problem is not global warming or any other extraneous factor, it’s forest mismanagement,” Myron Ebell, director of the Center for Energy and Environment at the Competitive Enterprise Institute, said in a press call with other center-right experts. “I would call it eco-imperialism.”

In a separate interview with Fox News, Ebell explained that the federal government owns 57 percent of the forest land in California, but approximately 80 percent of the lumber produced in California comes from private lands, thanks to federal regulation and misconceptions about the role of logging in forest management. While environmentalists see logging as an exploitation of the environment, logging actually serves a key role in removing extra lumber that can build up and increase the risk of devastating fires.

By “eco-imperialism,” Ebell told Fox News, he means that “the support for locking things up and not using them is really based on the fact that most of the decision-makers live in urban areas and they don’t know what the forests need but they believe that locking them up is the way to preserve the environment.”

‘The federal government actually controls the rural economies of the Western states,” the analyst explained. While the Bureau of Land Management and the Forest Service “believed in the productive use of the resources – timber, mining, oil and gas production” for decades, these agencies have severely restricted that use since the 1990s.

Logging increased slightly under President Barack Obama, and the Trump administration aimed to increase logging to 4 billion board-feet in the first term, then 8 billion in a hypothetical second term. The Biden administration has pledged to decrease logging once again.

Even Trump’s turnaround proved difficult, since most of the sawmills had closed, Ebell explained. About 175 sawmills closed in the 1990s.

Due to the decrease in logging, the analyst explained, California’s forests have experienced a huge fuel build-up, and during times of drought, trees become susceptible to insects and disease, leaving “hundreds of millions of dead trees.”

Regular fires fulfill a vital role in a forest ecosystem, clearing out excess brush and helping some seeds to sprout, while leaving many large trees intact. Yet when fuel builds up, and dead trees pile on one another, “there’s no green stuff to keep the fire down,” Ebell explained.

“Going down from 12 billion board-feet to 2 billion board-feet has not only destroyed these areas economically,” the analyst told Fox News. “There’s a big difference between just a forest fire and what we’re having now. This build-up leads to very hot fires, catastrophic fires, and it will burn everything. These fires even scorch the soil – they are incredibly destructive to the environment.”

Ebell dismissed the idea that climate change explains these destructive fires. “Having the outside temperature be five degrees higher than last year won’t make an impact on a fire that’s a hundred degrees hotter than it should be,” he told Fox News. 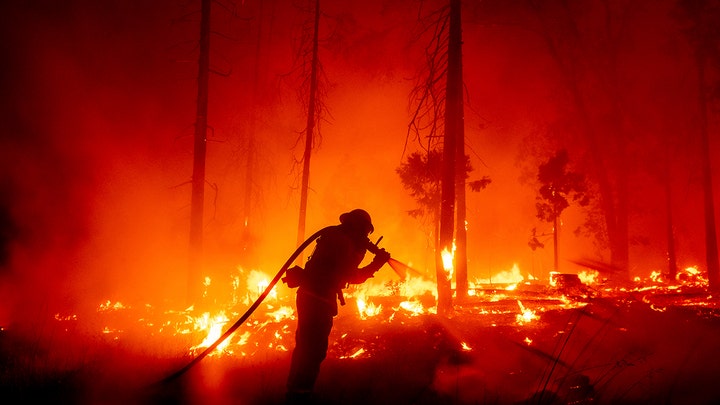 Ebell also faulted the Forest Service for banning firefighting during the night – when temperatures are cooler. He also noted that federal regulations disincentivize controlled burns, one of the best ways to reduce fuel in a forest. While fires do not count as emissions under the Clean Air Act, controlled burns do.

Gregory Wrightstone, a geologist and executive director of the CO2 Coalition, also briefed reporters on the call concerning the California wildfires.

“Th current western drought has been called unusual and unprecedented,” Wrightstone noted. “This is categorically false. There were many other periods in the southwestern United States that experienced worse draughts.” He mentioned the Great Anasazi Drought of 1275 that drove the Anasazi people from the Southwest.

“Perhaps the greatest emitter in California is government failure,” Milloy quipped. “If California is worried about emissions, perhaps it might want to start by managing these forest fires.”

Neither the Forest Service nor the Bureau of Land Management responded to Fox News’ request for comment.