military Sgt. 1st Class Jonathan Pentland has been charged with misdemeanor assault for shoving a Black man outside his us-regions home earlier this week after ordering him to leave the area repeatedly in a three-minute, viral video.

Days later, Pentland and his family packed up and left, with a police escort, after Black Lives Matter protesters demonstrated outside into the night Wednesday.

The five-bedroom, 3,429-square-foot corner house sports a three-car garage and four and a half bathrooms. It was built in 2019 and went for around $280,000, according to past real estate listings. It sits on roughly a quarter acre.

It “HAS IT ALL,” the description boasted, including spacious bedrooms, tankless hot water, granite countertops and a gas range. 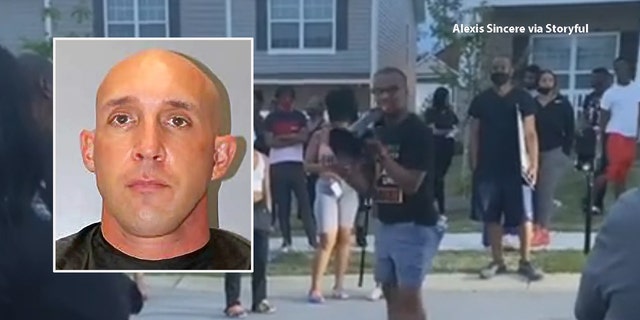 Then this week, as Black Lives Matter protesters gathered outside, vandals broke at least one window and a light fixture and tossed garbage at the home, and police ushered the family to a safe location.

The Pentlands have not responded to repeated Fox News requests for comment.

“The behavior and conduct of Mr. Pentland is not condoned by The Summit Community and in-fact strongly condemned by the Board, and members of this community,” Summit’s HOA Board President Justin Martin said in a statement on the association’s website. “He does not represent this multi-cultural and multi-racial community.”

The HOA condemned Pentland’s actions in the video but asked protesters not to protest within the community.

“We understand the need to protest and the want to speak up by protest, but request that you not protest within the community,” Martin said. “This only hurts the overwhelmingly good citizens of this small neighborhood.”

Martin told Fox News Friday evening that it was “pretty normal” for residents to be walking through diverse the community’s streets during fair weather.

“In my neighborhood, it’s at least 50% White to 50% people of color,” he said. “It’s a pretty typical Columbia middle class neighborhood.”

The protests have since calmed down, he said, adding that local Black Lives Matter leaders “were very considerate when we spoke to them.”

“We understood the need and want to protest, but some of it disrupted innocent neighbors,” Martin said. “Thankfully the local BLM chapter recognized that.”

The Summit is located northeast of Columbia, S.C., and includes a number of newly constructed homes.

In the video, the drill sergeant can be seen shoving the man away as he appears to step toward the home. He repeatedly tries to warn him off, demanding he “walk away” and stop “harassing” neighbors. An incident report alleges that he shoved the man at least one other time, which does not appear on the video, damaging his phone.

Police have declined to confirm his name, although social media users have identified him as “Deandre.”

According to authorities, he may suffer from medical conditions. Fox News’ attempts to make contact with Deandre went unanswered, and the local Live 5 News reported that he and his mother were avoiding the media out of concerns for their safety.

“You’re in the wrong neighborhood, m———–,” Pentland says at one point in the video. “Get out.”

Pentland asks for an address, which is not given, but Deandre later insists he had lived in the area since before the subdivision was constructed — and neighbors have confirmed he lived in the community.

“I live here,” Deandre says in the video. “I’m not harassing anyone. I’m walking through the neighborhood.”

“We are a tightknit community,” Pentland says, gesturing at the surrounding homes. “We take care of each other.”

Incident reports indicated that Deandre had also been suspected of a misdemeanor assault for allegedly touching a woman’s waist without her permission and picking up someone else’s baby repeatedly.

Richland County Sheriff Leon Lott, however, said those claims would not be prosecuted and that no actions Deandre took before his encounter with Pentland warranted the soldier’s reaction.

Pentland, a drill sergeant at the nearby Fort Jackson, has been relieved of instructor duties pending an Army investigation and the criminal case, the base said in a statement.