According to the ministry, this is a new disclosure, that Iran is using its Kashan airbase, about 100 miles from the city of Isfahan, to train Iran-affiliated militias.

“The Kashan base is used to train terrorists from Yemen, Iraq, Syria and Lebanon,” Gantz said at the annual International Institute for Counter-Terrorism Conference at Reichman University. “These terrorists are trained to employ UAVs produced by Iran. This base is a key point from which Iranian aerial terrorism is exported to the region.”

His office provided what it said is a satellite image showing UAVs on the runways at Kashan. 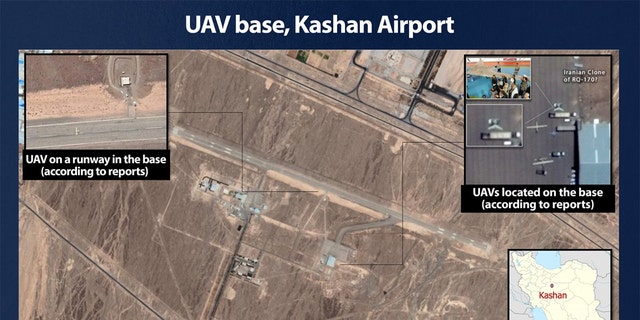 “One of the most significant tools that Iran has developed is its unmanned aerial vehicle system,” Gantz said. “It’s an accurate, deadly system that can cross thousands of kilometers. The Iranians produce and export them to their proxies.” Gantz said Iran had attempted to transfer the know-how needed for UAV production to Gaza.

An Iranian-produced drone recently attacked the tanker Mercer Street, a Liberian-flagged, Japanese-owned petroleum product vessel managed by Israeli-owned Zodiac Maritime near the Gulf of Oman. Two crew members were killed, a Briton and a Romanian.

“Upon review of the available information, we are confident that Iran conducted this attack, which killed two innocent people, using one-way explosive UAVs, a lethal capability it is increasingly employing throughout the region,” the U.S. State Department said in a statement.

The minister also called for a joint international campaign against Iran. “The efforts against Iran, as well as against Afghanistan and other countries, are not just interests for the Middle East or the West. Proxies can be set up anywhere in the world,” he said. “This is the time for all the world’s powers, including Russia and China, to join the campaign to maintain global stability.”