judiciary Justice Amy Coney Barrett has sold the South Bend, Indiana homea> where she’s lived with her family for the last 19 years, according to a local report.< reported on Monday. The 4,232-square-foot space was listed for $899,900, though it’s unclear how much the property ultimately sold for.

Jesse said they sold the house so he and their seven children could join Amy in Washington, D.C. in time for the upcoming school year, describing the decision as “what’s best for our family.”

“We moved here in 2002 when Amy got her teaching job at Notre Dame, and we have lived in this house since then,” he told the Chicago Tribune. “It’s a 1915 Arts and Crafts style house, and my recollection is that it was built by someone in the school of Frank Lloyd Wright.” 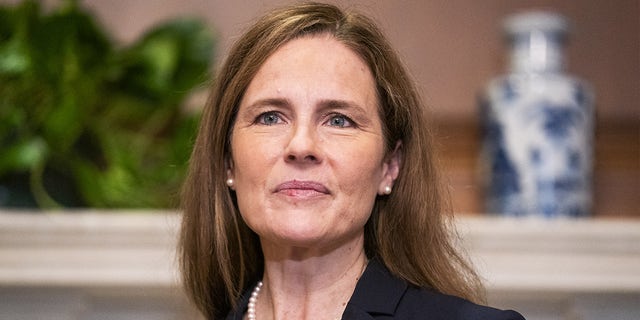 Supreme Court Justice Amy Coney Barrett and her family are on the move.
(Jim Lo Scalzo/EPA/Bloomberg via Getty Images)

“We raised seven children here and we put an addition on and we did an awful lot of work to it – we redid the kitchen, we added bathrooms. It’s kind of a part of us,” he said, bittersweet. “It’s sad to leave it, but we’re excited that hopefully someone else can raise a family in it and have the same experience.”

Jesse, an attorney and former federal prosecutor, said it was important to the couple to live somewhere within walking distance of their children’s schools and the Notre Dame campus. Before she was elected to the Supreme Court, Amy was a law professor at the private Catholic university.

According to the Tribune, the six-bed, five-bath home features a fireplace in the living room, built-in bookcases, a finished lower level, a refinished kitchen and hardwood floors throughout. Outside, a fenced backyard, large patio, covered deck and two-car garage make the family-friendly space complete.

The property was listed with Pat McCullough of Irish Realty, who explained why Harter Heights real estate is red hot.

“The area has frankly exploded,” McCullough said of demand. “People love the combination there of being close to Notre Dame and also the proximity of being within walking distance to downtown South Bend. It’s a very hot, hot market.”