Katie Holmes is celebrating a special moment in her daughter Suri Cruise‘s life.

The daughter of Holmes and her ex-husband, Tom Cruise, turned 15 years old on April 18. The “Dawson’s Creek” alum, 42, paid tribute to the special day with a post on social media.

“Happy 15th Birthday Sweetheart! I love you!!!!!!!!!! I can’t believe you are already 15!” the actress captioned a series of never-before-seen photos of young Suri.

Holmes previously told Elle UK she was happy to become a mother at 27 years old.

“I was happy to become a mom in my twenties,” she said. “It’s been nice that our ages fit… how do I put this? Every age that my child has been and my age at that time has been a good match. We kind of grew up together.” 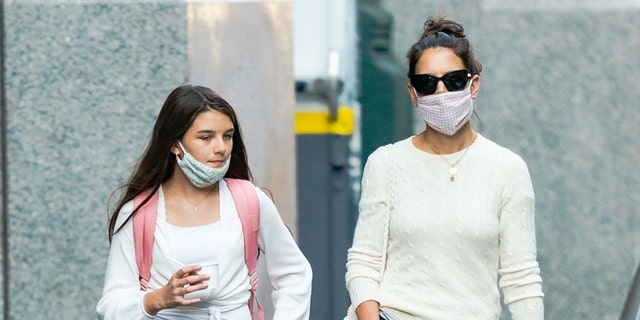 Holmes and Cruise married on November 18, 2006, in Italy. She filed for divorce in June 2012 and moved to New York with Suri.

In an interview with InStyle in 2020, Holmes called the period of time right after her divorce “intense.”

“It was a lot of attention, and I had a little child on top of it. We had some funny moments out and about in public,” she said.

“Obviously, as a public person, I’ve gotten a lot of attention at different periods in my life. And when you have a lot of attention, sometimes you don’t want to leave the house because it’s just too much,” Holmes reasoned.

She continued, “You can get consumed by what people think, but suddenly you just decide to do things on your own terms. I feel like I’m finally figuring that out. I’m getting the projects I want made and just relaxing a little. I’ve been around for a long time, and I’m still here! I can’t believe it.”