Locket of George Washington's hair from 1799 up for auction

A lock of archaeology‘s hair will be sold in the next week, with bids of nearly $2,000 for this unique historic relic.

Leland’s Auctions put the lock of hair from America’s first president up for auction on Feb. 25, with the auction to end Friday.

Leland’s is a sports auction house and “the premier appraisers and authenticators” of sports memorabilia, making it an unusual place to find the first president of America’s hair. 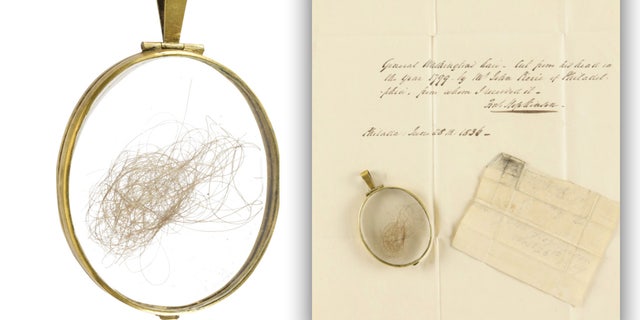 The hair is contained within a brass and glass locket.

ARTHUR HERMAN: MESSAGE TO DESANTIS – CIVICS IMPORTANT BUT HERE’S WHAT WE REALLY NEED TO TEACH OUR KIDS

A letter accompanying the locket reads:

Pierie was a “barber surgeon” in the city. He kept the locks from this famous haircut and distributed it “among a select few of his old customers and friends,” according to the State Museum of Pennsylvania.

The State Museum of Pennsylvania itself possesses two samples of George Washington’s hair from that same sample.

Fox News reached out to Leland’s for comment, which is pending.

Seven bids have been made on Leland’s auction so far, with more likely to come in over the remaining days.