us-regions Lt. Gov. Mark Robinson, a Republican, told Fox News in an interview that he is “seriously considering” a run for senate” target=”_blank”>Senate<

“A lot of people in North Carolina have come to us and asked us to run, quite frankly. They have a lot of confidence in our team,” Robinson said. “It’s still something that I kind of roundly dismissed, until maybe a couple weeks ago we saw some numbers very, very favorable in our position.” 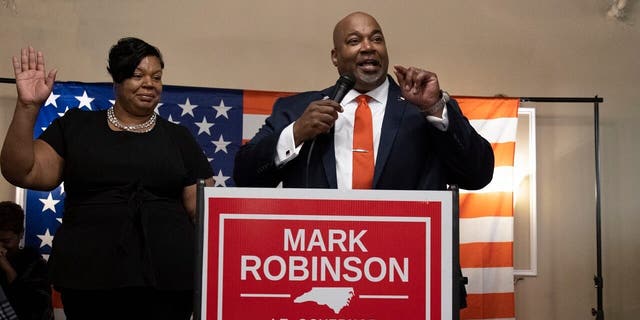 The Carolina Journal first reported on Tuesday that Robinson was considering a Senate run. Former North Carolina Gov. Pat McCrory, also a Republican, jumped into the race on Wednesday.

Rep. Dan Bishop, R-N.C., seemed to support Robinson after reports he may run.

“Like an earthquake!! No more perfect candidate for this time. Bring it,” Bishop wrote on Twitter on Wednesday in response to a tweet saying Robinson has the potential to shake up the Senate race.

Robinson told Fox News that it was an “honor” to have the encouragement of Bishop.

Long a red state, North Carolina has become increasingly competitive in recent cycles. Sen. Thom Tillis, R-N.C., narrowly won reelection after his challenger, Democrat Cal Cunningham, was politically wounded after news of his extramarital affair made major headlines prior to the election.

Robinson said North Carolina is “absolutely” still a red state and the North Carolina Senate seat that will be vacated by Sen. Richard Burr could determine the direction of the nation.

“We want to find the place where we’re going to do the most good for our nation, for our state, at this time,” Robinson said on Wednesday.

Robinson, a former factory worker, campaigned as a political outsider in the 2020 election.

Nearly $300 million – a record – was spent by both sides in the 2020 Senate showdown in North Carolina, and the 2022 race is also expected to be extremely expensive.

In addition to McCrory, former Rep. Mark Walker is running as a Republican, and all eyes are on Rep. Ted Budd, R-N.C., and Lara Trump, who are reported to be considering it as well.