A cluster of severe storms swept across Southern states early Saturday, leaving at least one dead in Louisiana, bringing down trees and power lines in Mississippi, dropping large hail on a coastal Alabama city and leveling buildings in the Florida Panhandle.

St. Landry Parish President Jessie Bellard confirmed a fatality related to an early morning tornadoa> in Palmetto, Louisiana. Bellard tells KLFY-TV that Jose Antonio Higareda, 27, was killed when the tornado struck his home. In addition, he said, seven people were transported with injuries to local hospitals.< ripped down power lines and trees in Rankin County, but no injuries were reported.

In Panama City Beach,us-regions, a home and convenience store were leveled by a possible tornadoa>, city officials said in a Facebook post . A resident’s photo posted by <a href="https: Herald shows the store’s roof and walls ripped away, but its counters, shelves and the merchandise they held appear untouched. There were no immediate reports of injuries.

The town is in Bay County, which was heavily damaged by Hurricane Michael in 2018.

“Many people were saying, ‘Hey, we know what to do. Sadly, we’ve been through it before’ and they pulled together as a community,” Panama City Mayor Mark Sheldon told the News Herald. “We were seeing neighbors come out and helping other neighbors and that’s what Panama City Beach is all about.” 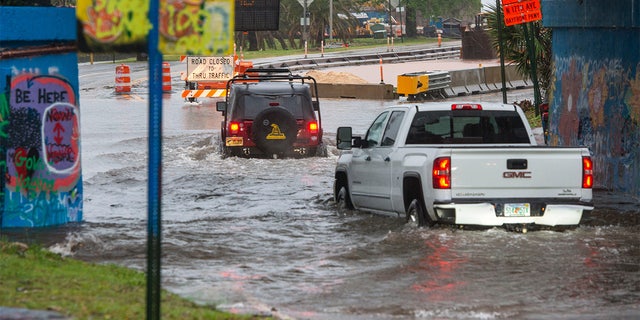 Trucks make their way through high water Saturday, April 10, 2021, at the Graffiti Bridge in Pensacola after a powerful storm swept through the area.Saturday Storm 1
(Reuters)

In Pensacola, Florida, the roof of a downtown brewery was ripped off by the storm, local news reports show. The National Weather Service has not confirmed if that was caused by a tornado, but reported winds of up to 60 mph (95 kpm). The Pensacola News Journal reports that about 5 inches (13 centimeters) of rain fell.

“We are still learning about what exactly the damage is and what is going on,” Veronique Zayas, co-owner of Emerald Republic Brewing, told the paper. “But we know that the roof is a total loss. There is water damage throughout, and a lot of equipment has been damaged.” 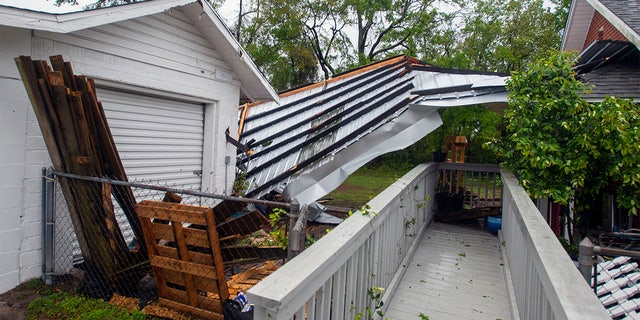 A powerful storm ripped off the roof of Emerald Coast Brewing on West Government Street in Pensacola early on Saturday, April 10, 2021. Part of the roof landed at the business next door.Emerald Republic Brewing Roof Dammage 5
(Reuters) 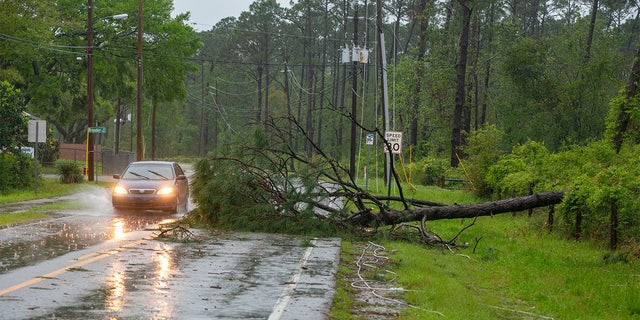 A car goes around a fallen tree on Patton Drive in Pensacola on Saturday, April 10, 2021, after a powerful storm swept through the area.Saturday Storm 6
(Reuters)

She said it was fortunate no one was hurt.

“The brewers are normally here at 5 or 6 in the morning to start their brewing,” she said. “Luckily, no one was here.”

Images shared by news outlets showed car windshields shattered by hail about as large as baseballs in Orange Beach, Alabama.

Bellard said search and rescue crews are out in Louisiana in the wake of the storm.

“My thoughts and prayers are with the families affected by this storm,” he said. “We’re doing everything we can for those families.”

Bellard reported that SLEMCO, St. Landry Public Works, Animal Control and the Sheriff’s Department were on the scene and working on debris clearance and restoring power to the area.

The National Weather Service has said the tornado that hit the area was ranked an EF3 tornado, with wind speeds between 130 and 140 mph (between 209 and 225 kph).

Some flooding was reported. Thousands of customers in the region lost power, according to utility tracking website poweroutage.us.