Former united-nations” target=”_blank”>United Nations< last August, which presented “evidence of genocide and crimes against humanity taking place against the Uyghur and other Turkic Muslims by the People’s Republic of China.”

Michael Polak, a London-based human rights lawyer who represents the World Uyghur Congress, said that the IOC has not responded to the complaint, instead referencing a statement about “political non-interference” by IOC President Thomas Bach, who is a subject of the complaint.

“I was shocked at the scant response to our original lengthy and evidence-based complaint, which was to simply refer us back to the IOC Executive Committee, the very subject of our ethical complaint,” Polak said Friday. 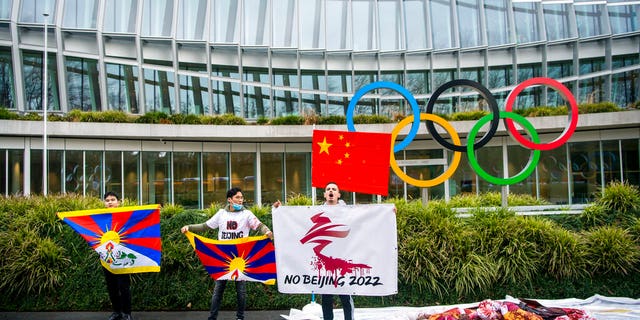 Protesters hold Tibetan flags during a protest against Beijing 2022 Winter Olympics by activists of the Tibetan Youth Association in Europe, in front of the International Olympic Committee, IOC, headquarters in Lausanne, Switzerland, Wednesday, Feb. 3, 2021. (Jean-Christophe Bott/Keystone via AP)
(The Associated Press)

Several senate lawmakers have pressured the Biden administration to either boycott the games in Beijing or lobby the IOC to move them elsewhere.

White House press secretary Jen Psaki said last week that a “final decision” on how to handle the 2022 Olympics has not been made, and that they are looking to the U.S. Olympic Committee for guidance.

On the last day of donald-trump” target=”_blank”>Trump’s presidency< and the Dutch parliament passing motions last month that label the treatment of Uyghurs a genocide.

China denies that any human rights abuses are taking place in its Xinjiang province, saying that its policies are in place to combat radicalism.

World Uyghur Congress President Dolkun Isa disagrees, saying that the IOC must take action before the 2022 Olympics start in 11 months.

“The IOC can no longer hide behind ‘political neutrality’ to justify its decision to host the games in a country that is currently committing genocide and crimes against humanity,” Dolkun said Friday. “Real people are suffering from these crimes every day and the Olympics and the sponsors risk being forever tainted with the intense suffering of my people.”