“A very sad day,” she wrote. “Guinness world record Darius has been stolen from his home. The police are doing there best to find out who has taken him. There is a reward of a £1,000. Darius is to [sic] old to breed now. So please bring him back.”

Edwards raised the reward on Tuesday, tweeting: “Please Please I am so upset Can you bring my Darius back I am putting the reward up to £2,000.”

According to DailyMail.com, Edwards has owned more than 100 rabbits as a breeder and has owned the world’s longest rabbit since 2008. 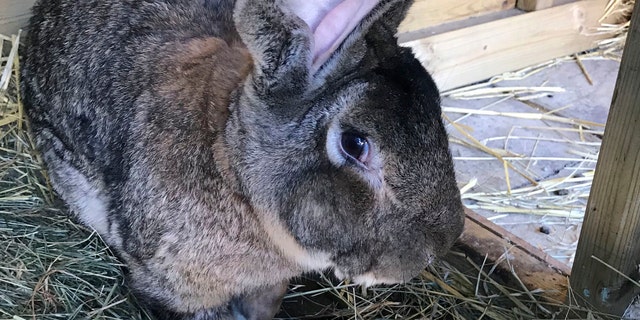 Darius, the world’s longest rabbit, was reportedly stolen from his home over the weekend. His owner, former Playboy model and rabbit breeder Annette Edwards is offering a reward for his return. (West Mercia Police via AP)

Darius was named as the world’s longest rabbit in 2010, according to GWR.

In a statement published Monday, West Mercia Police asked for information regarding the missing rabbit.

“We are appealing for information following the theft of an award winning rabbit from its home in Stoulton, Worcestershire,” police wrote. “It is believed the Continental Giant rabbit was stolen from its enclosure in the garden of the property of its owners overnight on Saturday (10 April – 11 April).”