Like previous New Shepard flight tests, NS-15 did not include any passengers. Instead, it contained the company’s test dummy “Mannequin Skywalker”, along with 25,000 postcards from Club for the Future, a nonprofit dedicated to inspiring younger generations to pursue careers in STEM.

For the first time, however, Blue Origin had a team of four executives serve as stand-in astronauts to conduct a series of pre-launch checks in the crew capsule, which can hold up to six passengers.

The excercise included walking up the New Shepard launch tower, boarding the capsule, conducting a system check of New Shepard’s CAPCOM communicator, which allows the crew to remain in contact with personnel on the ground, and exiting the capsule. 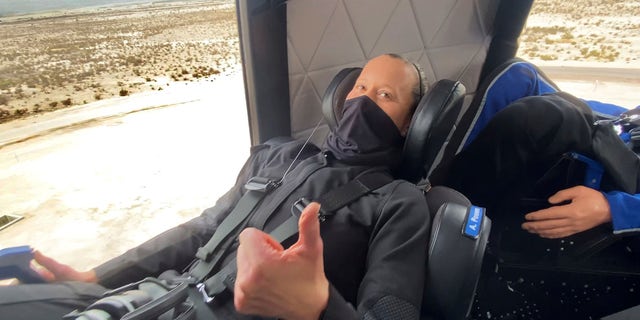 In this photo made available by Blue Origin, Audrey Powers gives a thumbs up inside the New Shepard rocket capsule during a crew rehearsal in West Texas on Wednesday, April 14, 2021. Two employees were strapped into the fueled rocketship for practice, but they disembarked shortly before the capsule launched to the edge of space with only a test dummy. (Blue Origin via AP)

Following the pre-launch excercise, the team of executives exited the capsule about 15 minutes prior to New Shepard’s liftoff.

The rocket’s crew capsule was then separated from the rocket, hitting an altitude of 347,574 feet above the ground before making its sixteenth consecutive landing with assistance from three parachutes.

Meanwhile, New Shepard reignited its BE-4 engine as it made its descent back towards Earth and deployed fourt short legs before touching down on a slab of concrete about two miles from its initial launchpad. In total, the flight lasted for approximately 10 minutes.

Following the successful landing of the capsule and NS-15, the stand-in astronauts rehearsed post flight procedures, including opening the capsule’s hatch and exiting the capsule.

While Blue Origin has not announced an exact date for when it will fly its first human passengers to space, the company revealed during Wednesday’s test that the first crewed flight would happen “soon.”

Bezos founded Blue Origin in 2000 and has funded the firm in part through sales of his personal Amazon stock holdings in recent years. The firm is considered a direct competitor to Elon Musk’s SpaceX and Richard Branson’s Virgin Galactic.

In addition to its work on New Shepard, Blue Origin landed a services contract with NASA earlier this year for its “New Glenn” orbital launch vehicle that will allow the firm to compete for future NASA missions, including planetary expeditions, Earth observation missions and satellite launches.

Under the contract’s terms, Blue Origin’s New Glenn system is eligible for orders through June 2025 and missions through the end of 2027. The New Glenn partnership is in support of NASA’s Artemis Program, which aims to bring astronauts back to the moon by 2024.