Rep. Brian Mast, R-Fla., accused the Biden administration of blocking the annual Rolling to Remember motorcycle rally, a 30-year-plus Memorial Day tradition for military that has always been staged in the defense parking lot.

“We are blessed beyond words to be citizens of the greatest country on Earth, and only live free thanks to the men and women who made the ultimate sacrifice,” Mast said in a statement. “But the Biden Administration seems intent on restricting that freedom, and now, even restricting Memorial Day ceremonies. Preventing a tradition like Rolling to Remember flies in the face of the freedoms that so many have died to protect.”

“I can confirm that we received the letter from Rep. Brian Mast. As with other congressional correspondence, we will respond directly to the member of Congress,” Pentagon spokewsoman Sue Gough told Fox News in a statement. 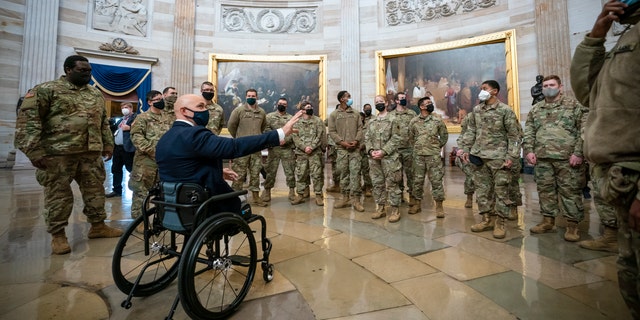 Gough told Stars & Stripes that “there’s been no decision yet” and that the permit request “is still being evaluated in light of the ongoing COVID-19 pandemic.”

AMVETS National Executive Director Joe Chennelly is worried the group will have to scramble for a Plan B.

“We’ve been trying to really be good partners in all of this and not blast the Pentagon, but we’ve gotten to point recently where we have to put the pressure on them,” Chennelly told Stars & Stripes.

Mast, a 12-year Army veteran, worked as a bomb disposal expert and lost both his legs while deployed in Afghanistan.