A suspected poacher was trampled to death by a wild-nature” target=”_blank”>herd of elephants< over the weekend, according to national park officials.

The man and two alleged accomplices ran into a herd of elephants as they were trying to escape from rangers who had spotted them at Kruger National Park, one of Africa’s largest game reserves, on Saturday, South African National Parks said in a statement.

The rangers searched the area and found a man “badly trampled,” who later succumbed to his injuries, according to the release. 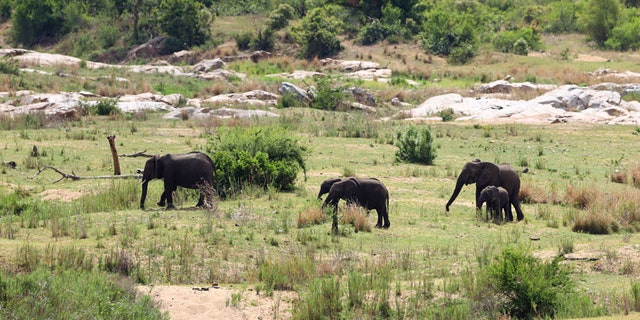 Elephants are pictured in the nearby Kruger National Park on November 26, 2020, in Malelane, South Africa. (Photo by Richard Heathcote/Getty Images)

The rangers requested backup from the Airwing and K9 unit. When the suspects realized they had been spotted, they dropped an axe, and a bag with their provisions “in an attempt to escape,” the statement added.

Authorities are still looking for the third suspect, who continued to flee and is believed to have suffered an eye injury.

LA MOUNTAIN BIKER DANGLES FROM SIDE OF CLIFF, IS RESCUED BY HELICOPTER

A rifle was also recovered. Officials said the trio are suspected of attempting to poach rhinos in the area.

“It is unfortunate that a life was unnecessarily lost,” said Gareth Coleman, managing executive of the Kruger National Park. “The campaign against poaching is the responsibility of all us; it threatens many livelihoods, destroys families, and takes much-needed resources to fight crime which could be used for creating jobs and development.”