This education is certainly learning the powers of persuasiona>. <, according to a Facebook post from her school.

“Dear Old Navy, I do not like that the front pockets of the girls jeans are fake,” Gardner wrote in her letter to the retailer. “I want front pockets because I want to put my hands in them. I also would like to put things in them. Would you consider making girls jeans with front pockets that are not fake. Thank you for reading my request.”

Though it took some time a representative from Old Navy’s kids department did end up responding to Gardner’s request. 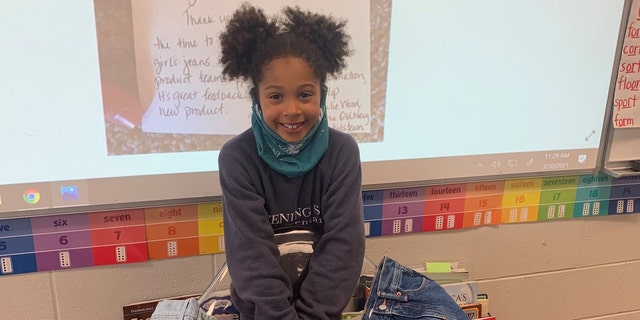 The note, which was signed by Julie Wood, also came with four pairs of girls’ jeans with actual pockets, according to Evening Star Elementary’s Facebook post.

“Thank you so much for taking the time to write us about pockets on girls’ jeans,” Wood wrote in her response. “The Old Navy Kids product team appreciates your information. It’s great feedback for us as we develop new product.” 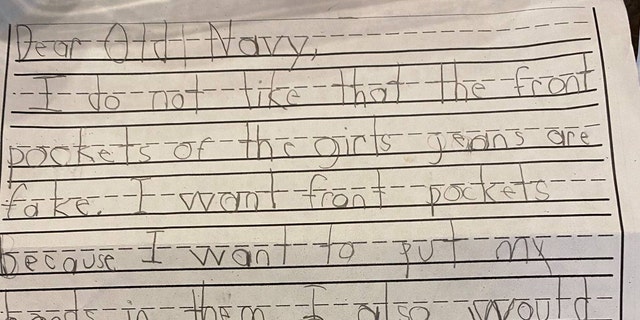 The letter was part of a persuasive writing assignment in her first grade class at Evening Star Elementary School.
(Bentonville Schools)

On Thursday, Gardner told the Today show that she didn’t expect to hear back from Old Navy since it took them so long to respond. 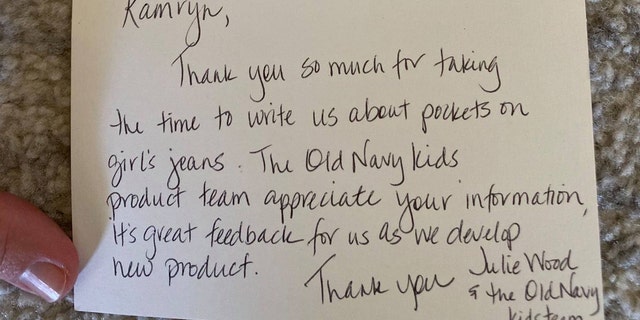 Old Navy eventually responded to Gardner with a handwritten note and four pairs of girls’ jeans with pockets.
(Bentonville Schools)

However, when she got the package in the mail, she said she was “very excited.”

“As soon as we got back from our spring break vacation, the box was there,” she said. “I thought it was a birthday present.”

education” target=”_blank”>Bentonville Schools< about Gardner’s letter, praising the first grader for her letter.

“Kamryn, you proudly own those pockets!” the district wrote, in part. “Kudos to Old Navy for making this first grader’s day and ours!”