Spinosaurus, the terrifying archaeology that was the antagonist of “Jurassic Park III,” was an actual “river monster,” according to newly published research.

The study, published in the scientific journal Cretaceous Research, looked at 1,200 fossilized teeth from the giant dino and discovered it was “the most commonly found creature” in the Kem Kem river system, which ran through the Sahara Desert 100 million years ago.

“From this research we are able to confirm this location as the place where this gigantic dinosaur not only lived but also died,” study co-author and University of Portsmouth professor David Martill said in a statement. “The results are fully consistent with the idea of a truly water-dwelling, ‘river monster.'” 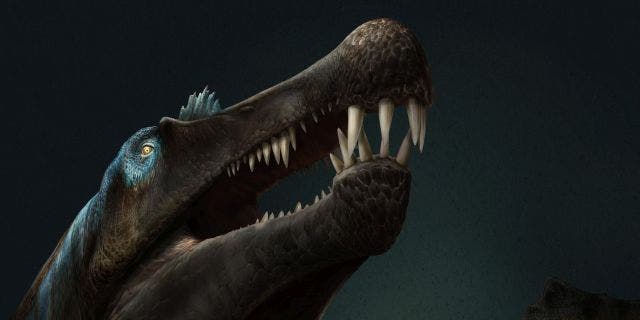 The Kem Kem river system was recently described as “arguably the most dangerous place in the history of planet Earth” and is considered “an amazing source” of Spinosaurus remains, according to the study’s lead author, Thomas Beevor.

“They also preserve the remains of many other Cretaceous creatures including sawfish, coelacanths, crocodiles, flying reptiles, and other land-living dinosaurs,” Beevor added. “With such an abundance of Spinosaurus teeth, it is highly likely that this animal was living mostly within the river rather than along its banks.” 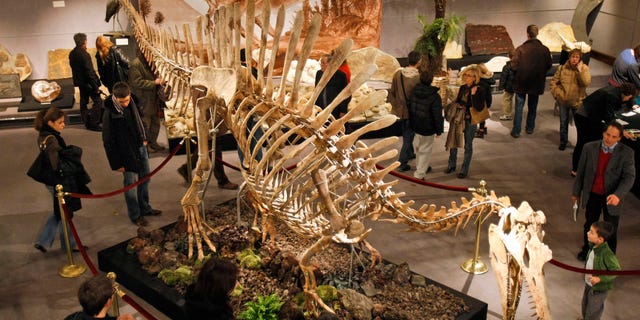 The skeleton of a prehistoric Spinosaurus during a presentation to the public at Drouot Montaigne auction house in Paris, Sunday, Nov. 29, 2009.
(AP)

THE MOST DANGEROUS PLACE IN THE HISTORY OF PLANET EARTH REVEALED

Along with Spinosaurus, fossils from the three largest predatory dinosaurs have been discovered at Kem Kem, which was comprised of a vast river system 100 million years ago. These include the saber-toothed Carcharodontosaurus, which was over 26 feet long, and the raptor Deltadromeus, which was around 26 feet in length.

“The enhanced abundance of Spinosaurus teeth, relative to other dinosaurs, is a reflection of their aquatic lifestyle,” Martill added. “An animal living much of its life in water is much more likely to contribute teeth to the river deposit than those dinosaurs that perhaps only visited the river for drinking and feeding along its banks.”