The U.S. justice-department” target=”_blank”>Justice Department< and his wife, Nydia, with a lawsuit Friday alleging the couple owes nearly $2 million in taxes to the Internal Revenue Service (IRS) dating back more than a decade.

The feds filed the lawsuit in federal court in Fort Lauderdale, Florida. The suit claims the Stones owe more than $1.5 million in back income taxes from 2007 until 2011, and separately alleges that Stone also owes more than $400,000 for not fully paying his tax bill in 2018.

The lawsuit claims that the couple used a commercial entity known as Drake Ventures to “shield their personal income from enforced collection” and to fund a “lavish lifestyle.”

ROGER STONE, AT CPAC, SAYS HE’D BACK TRUMP IN 2024 BUT WARNS DEMS, MEDIA WILL TRY TO ‘BURY’ ACCOMPLISHMENTS

“Despite notice and demand for payment, Roger and Nydia Stone have failed and refused to pay the entire amount of the liabilities,” the lawsuit said, according to The Associated Press. 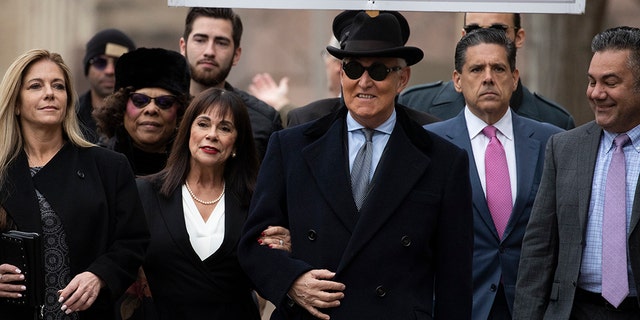 Stone served as an informal adviser to former President Donald Trump’s 2016 campaign but was sentenced to 40 months in prison in 2019 after being convicted on seven counts of obstruction, witness tampering and making false statements to Congress on charges that stemmed from former Special Counsel Robert Mueller’s investigation. Trump pardoned Stone at the end of his time in office.

In a lengthy statement Saturday to Fox News, Stone panned the Justice Department lawsuit as “politically motivated” and said he’s broke after fighting his criminal case.

“That my wife and I owe a significant amount in federal taxes has been a matter of public record for several years,” Stone told Fox News. “This is not news. We had worked diligently with the IRS to pay down our debt until we were financially destroyed by the politically motivated and corrupt Mueller investigation. The claim that my wife and I are living a lavish lifestyle is a laughable joke in view of the fact that we are virtually bankrupt.”

Stone pledged to fight back the lawsuit and claimed the case is motivated by “blood lust and liberal hysteria over the fact that [then] President Trump saw the clear corruption of my trial and had the strength and the courage to correct this injustice by issuing me a grant of clemency.”

Stone compared his treatment to that of Hunter Biden, President Biden’s son who is under federal investigation for his taxes and financial ties.

“Evidently I am being held to a far different standard than Hunter Biden who is, in fact, living a lavish lifestyle and the status of whose federal tax investigation we have no report on whatsoever,” Stone said.

Stone previously told Fox News in February that he was writing a book about his brush with the law, called “Roger Stone Did Nothing Wrong.”

Fox News’ Adam Shaw contributed to this report, as well as The Associated Press.