Voters ended up replaced him with Republican Arnold Schwarzenegger and Carey — who was 23 at the time — admitted she ran as a publicity stunt. She placed 10th out of a field of more than 130 candidates. 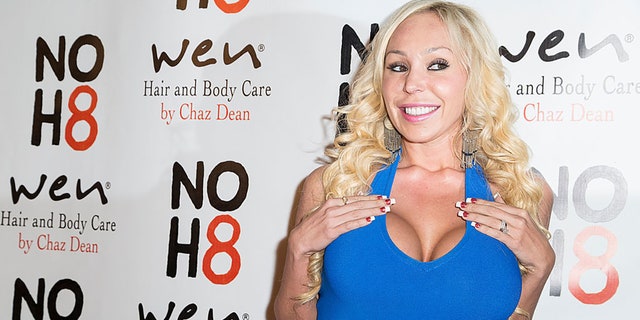 “Last time, I was young, dumb, and full of fun,” Carey, now 40, said in an interview this week, according to San Francisco’s KGO-TV. “And this time I’m more experienced and I am not going to take this position laying down. I am ready to be on top.”

Years later, Carey already has a website, where merchandise — t-shirts, tote bags, aprons, and stickers — related to the governor bid are available to purchase.

“I’m getting ready to take another shot at the California Gubernatorial Seat!! Political Strategy is in the works… Any and all support to fight the big political parties will help save our state!” Carey says on her website. “Finally a politician you want to be screwed by!!!”

California has a low bar to enter a recall election. A candidate must pay about $4,000, which could attract serious candidates and others possibly seeking fame, reports said.

In a few weeks, county election officials are set to report on whether recall proponents submitted the necessary amount of signatures to trigger an election, Politico reported.

Carey told KGO-TV that once the recall officially qualifies, she will travel to Sacramento, California to formally register before touring strip clubs across the state. Her policy focus will involve tackling the homelessness crisis and helping businesses impacted by the coronavirus pandemic.