FORT BENNING, Ga. — Some of the the U.S. Army’s most elite soldiers are on a new mission — to find out who’s the best among them.

After a one-year hiatus due to the coronavirus pandemic, the Best Ranger Competition has returned.

The grueling three-day team competition underway at Fort Benning will test soldiers physically and mentally as they work their way through a series of obstacle courses that simulate combat scenarios. 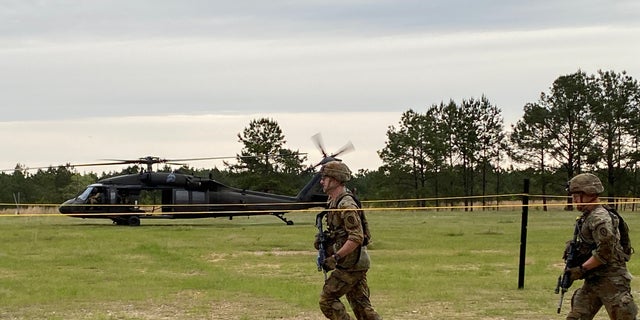 On Friday, the competition kicked off early, at 6 a.m. The 52 two-member teams — drawn from across the country and overseas — bunched together at the starting point and got their legs moving on a 9-mile run.

More than an hour later, the first teams could be seen crossing the finish line. Many appeared bright-eyed and full of energy, despite the rigors of the run.

“I don’t know how many people have ever run in boots, but … then you go from that to executing a grueling obstacle course where you’re climbing up stuff and you’re using different muscle groups,” said Col. Antwan Dunmyer. “So, you’re using a lot of energy, you know, just physical energy, and as a human, it takes a toll. You have limited food in your system, depending on how much sleep you got that night and that’s going to continue.”

The exhaustion of some of the competitors became clear as the teams reached the first obstacle course of the day.

The soldiers put their athletic ability to the test, muscling through a series of chin-ups, climbing up and down long ropes, scaling a log wall and crawling under barbed wire in a pool of chilly water. 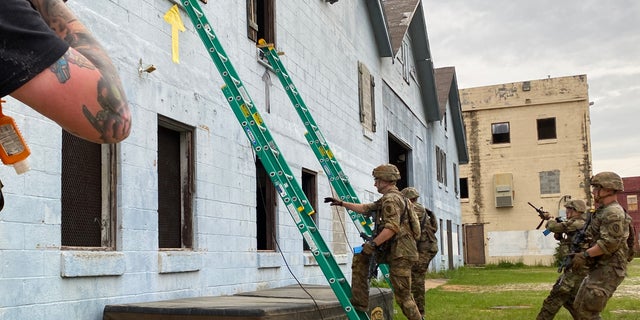 Later in the day, the teams ran 2.4 miles to what the Army calls the McKenna Urban Assault Obstacle Course. The Rangers had to utilize military tactics and weapons to assault and clear portions of a mock city, scaling ladders and using ropes to enter and exit buildings as various targets peaked through windows.

The teams also got a chance to show off their marksmanship skills.

Teams rotated between a pistol, rifle and shotgun as they quickly tried to hit a series of targets at multiple stations. Each shot they missed added three seconds to their time, though they could shave 20 seconds off their total time by successfully hitting a medal gong with a pistol at the beginning of the obstacle course.

While Best Ranger is a competition, the Army also views it as an opportunity for servicemen and servicewoman to put years of physical and mental training to work in combat situations they could find themselves in.

“These are the men and women that we put in [as] the lead soldiers in combat, and that’s what you want, someone with the mental and physical ability that’s going to lead our soldiers in combat to help our army, you know, fight and win our nation’s wars,” Dunmyer said. “These are the same soldiers and leaders that are at different installations, building lethal adaptive teams and taking them into combat. And all the while maintaining their physical fitness level to be able to come out here and compete on the world stage.”

This year marked the first time Ranger teams got a shot at the new Army Combat Fitness Test.

The fatigue was visible as teams scaled walls before each competitor had to toss around medicine balls and drag a 90-pound sled and kettle bells. That was the appetizer ahead of the main course, which included a 21-mile march to conclude the day.

As the weekend competition continues, participating teams will now have their times evaluated.

Those who made it through the obstacle courses the fastest will advance to another day of strenuous competition before a team is crowned Best Ranger — the best of the best.