After controversy prompted the reigning Mrs. World titleholder to resign, celebrity-news” target=”_blank”>Kate Schneider< after she forcibly pulled the crown off the head of a Mrs. Sri Lanka contestant during the beauty pageant. That action prompted the organization to crown the first runner-up, Mrs. Ireland, the new Mrs. World 2020.

The Facebook of Mrs. World, a beauty pageant for married women, published a photo of Schneider with the title of Mrs. World.

FORMER MISS UKRAINE TAKES LEGAL ACTION AFTER TITLE WAS REVOKED BECAUSE SHE WAS MARRIED, HAD CHILD

Jurie relinquished her title earlier this month, while defending her decision to remove the crown from the head of this year’s Mrs. Sri Lanka title holder, Pushpika De Silva, who she claimed was unqualified to take part in the April 4 contest because she was divorced.

De Silva said she is separated, but not divorced, from her husband.

“Being apart is one. Divorce is something else,” she said on Facebook. 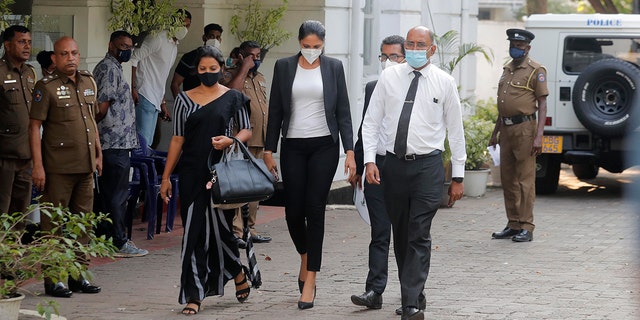 Mrs. World 2019 Caroline Jurie, center, leaves a police station after obtaining bail in Colombo, Sri Lanka, Thursday, April 8, 2021. Jurie’s decision to remove the crown from the the winning Mrs. Sri Lanka contestant on stage moments after the winner was announced, because of claims she was a divorcee, drew widespread social media condemnation. The winner Pushpika de Silva who was crowned again later had complained to police that her head was wounded when the clips of her crown were removed by Jurie.
(AP Photo/Eranga Jayawardena)

Jurie, who is also Sri Lankan, was accused of injuring De Silva in the televised pageant. Four days later, she was arrested on charges of “simple hurt and criminal force” and later released on bail.

Jurie said she was standing against “injustice” and that the pageant was “tainted.” She said she wanted to ensure that every contestant had an equal opportunity.

Mrs. World Inc. said in a statement Tuesday that Jurie’s “voluntary resignation decision was made solely by Caroline herself.”

The incident at the pageant, which was attended by the prime minister’s wife, created an uproar in Sri Lanka, which will host the final Mrs. World event this year.