Lukashenko later alleged that the U.S. was behind the alleged plot. He said he was “surprised” that “the Americans behave this way” and that “no one can set the task of eliminating the president, except the top political leadership,” according to his office’s website.

Russia’s President Vladimir Putin on Wednesday lamented the fact Western officials had not addressed the alleged plot against Lukashenko.

“It is typical that even such flagrant actions have not been condemned by the so-called collective West. Nobody seemed to notice. Everyone pretends nothing is happening,” Putin said. “[T]he practice of staging coups d’état and planning political assassinations, including those of high-ranking officials — well, this goes too far. This is beyond any limits.” 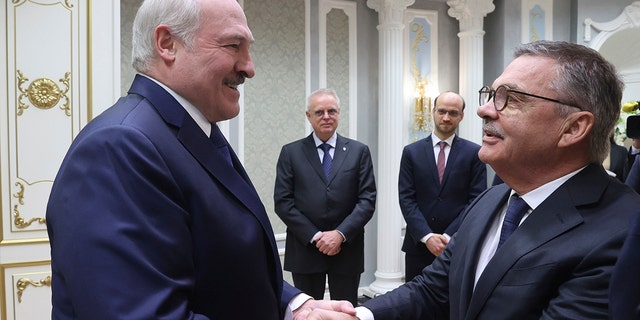 “I don’t think we take anything President Putin says personally. We have tough skin,” she said.

The United States officially categorizes Belarus, an ally of Russia, as an authoritarian country. The U.S. does not recognize the result of the 2020 presidential election. Secretary of State Anthony Blinken called it “fraudulent.”

“As a result of government suppression surrounding the fraudulent August 2020 Presidential elections in Belarus and its aftermath, there are more than 340 political prisoners detained in Belarus today,” Blinken said in a statement Monday. “The United States calls on the Belarusian authorities to immediately and unconditionally release all those unjustly detained or imprisoned.”

On Tuesday, U.S. Ambassador to Belarus Julie Fisher met with Belarus opposition leader Sviatlana Tsikhanouskaya in Lithuania. Tsikhanouskaya is in self-imposed exile in the neighboring country, according to Reuters.

“It is important that the international community speak up and speak out about what’s happening, that we pay close attention, and that we call for the immediate release of all political prisoners in Belarus,” Fisher said, according to Reuters.