executive press secretary Jen Psaki on Friday conceded that the joe-biden” target=”_blank”>Biden< countries to curb migration into the U.S.

President Biden has proposed a $4 billion plan for Central American countries including Mexico, Guatemala and Honduras to invest in tackling what he calls the “root causes” of the migration crisis like gang violence and economic instability.

Psaki touted the agreements on Monday, but Ricardo Zúñiga, special envoy for the Northern Triangle, testified on Wednesday before the House Foreign Affairs Committee that no such agreements had been “concluded.”

“Whether or not it was a formal agreement, which it was not, and I never conveyed that it was, these were steps that these countries indicated they plan to take to increase personnel and security to reduce the number of migrants coming across the border,” Psaki said during a Friday press briefing. 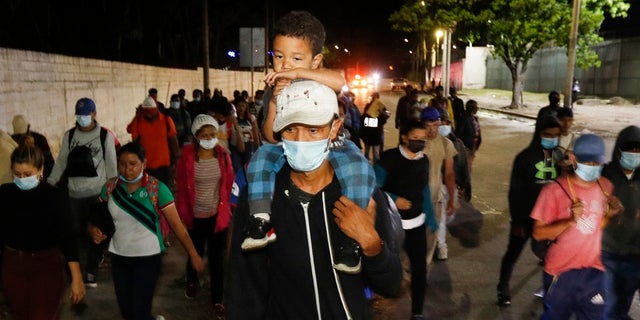 Migrants who aim to reach the U.S. walk along a highway as they leave San Pedro Sula, Honduras before dawn Tuesday. (AP Photo/Delmer Martinez)

Psaki added that the White House had never described a “formal agreement.”

On Monday, the press secretary said the goal of such agreements would be to “make it more difficult” for migrants “to make the journey, and make crossing the borders more difficult.”

She said she thought it is “fair to say” the White House struck “agreements” with Mexico, Guatemala and Honduras in response to a question from a reporter asking to specify terminology but added that “these discussions are ongoing over a period of time and take place at several levels of the government, both here and within these countries.”

Reuters reported Friday that the U.S. is considering a “conditional cash transfer program” to address what the White House believes are the economic woes that lead migrants to make the journey to the U.S. southern border. The plan also involves sending COVID-19 vaccines to the countries in Central  America.

Roberta Jacobson, the White House’s outgoing southern border coordinator, told Reuters about the proposal and said it would be targeted at Guatemala, Honduras and El Salvador — three Northern Triangle countries that are the source of much of the migration wave currently crashing against the U.S. border.

“We’re looking at all of the productive options to address both the economic reasons people may be migrating, as well as the protection and security reasons,” Jacobson said.

Meanwhile, the U.S. Agency for International Development (USAID) told Reuters that it is already using cash transfers in Central America “to help people meet their basic needs” after recent hurricanes, and is considering expanding such measures.