Taco Bell is testing a vegan meat alternative for its menu.

The chain announced Wednesday it’s experimenting with its own proprietary protein made from a pea and chickpea blend. The new protein will be a substitute option for seasoned beef in any menu item at no extra charge during the test, a spokesperson for Taco Bell told Fox News. 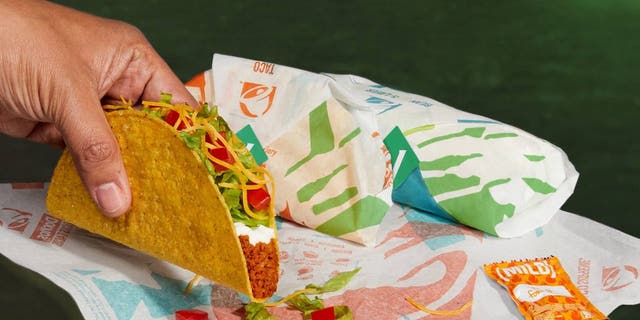 Taco Bell’s new alternative meat taco, the Cravetarian, made with pea and chickpea protein, will be sold as a test run in the chain’s Southern California location. (Taco Bell).

The meat alternative will be featured in what it’s calling the Cravetarian Taco. Made with shredded cheddar cheese, lettuce, tomatoes and sour cream, the crunchy item is served in a corn shell and similar to the original Crunchy Taco Supreme. The new taco will available at a Southern California Taco Bell through April 29 while supplies last, and potentially expand to other chains nationally

Taco Bell is the latest chain to ramp up alternative-meat efforts. The Bell is also working on a separate alternative protein with Beyond Meat, the chain announced in January. Other fast-food chains like Burger King, Dunkin’, Pizza Hut, Del Taco and White Castle have also partnered with plant-based meat makers  Beyond Meat and Impossible Foods for menu items, too.

Taco Bell’s chief executive officer Mark King told Bloomberg last year the chain would be embracing alternative proteins after the chain previously said it would stick to just highlighting its own vegetarian options.

The alternative meat market continues to expand globally. Earlier this month, Impossible Foods Inc. announced it was gearing up for a public listing that could value it at around $10 billion, sources told Reuters.