A former Democratic state lawmaker inus-regions, who switched to the GOP after backing donald-trump”>then-President Trump’< Republican primary challenge against Gov. Brian Kemp, who sits high atop the former president’s list of political targets.

The former lawmaker, Vernon Jones, tweeted Thursday evening, “The time has come. Georgia is ready!” He announced that he would hold a press conference  Friday morning outside the Georgia state capitol building, in downtown Atlanta, to announce his candidacy.

As he formally launched his gubernatorial bid outside the state capitol, Jones called his campaign the “beginning of a movement whose time has come.”

And he said that “for those of you who feel the incumbent governor didn’t fight for you, a new day has dawned.”

Trump has vowed to return to Georgia to campaign against Kemp when he’s up for reelection next year, to punish his onetime ally for refusing to help the then-president’s efforts last year to overturn the election results in Georgia. joe-biden”>President Biden<

The ballots in Georgia were counted three times — the original Election Day count, a mandatory hand recount and a recount requested by the president’s campaign.

Trump refused to concede to Biden and claimed for two months that there was massive voter fraud in Georgia and five other states where Biden narrowly won. Dozens of legal challenges by Trump and his allies were shot down, and then-Attorney General William Barr said his Justice Department had not seen fraud on the kind of scale that could flip the election. Trump repeatedly attacked Kemp for refusing to aid his attempts to reverse Biden’s victory.

At a rally in Georgia on the eve of the state’s twin Jan. 5 Senate runoff elections, Trump pledged, “I’ll be here in about a year and a half campaigning against your governor.” 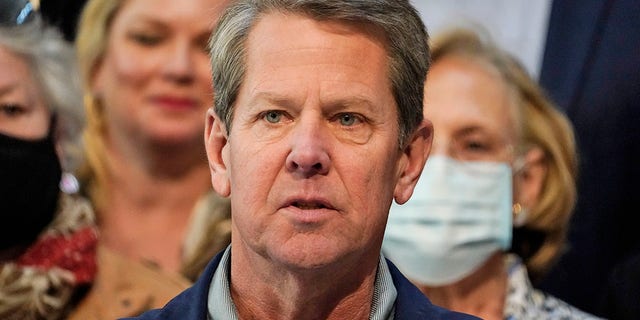 Georgia Gov. Brian Kemp speaks during a news conference at the State Capitol on Saturday, April 3, 2021, in Atlanta, about Major League Baseball’s decision to pull the 2021 All-Star Game from Atlanta over the league’s objection to a new Georgia voting law.
(AP Photo/Brynn Anderson)

While it’s unclear if Trump will endorse Jones, the candidate on Wednesday tweeted out a video of himself standing in a crowd last week with the former president at Trump’s residence at his Mar-a-Lago resort in south Florida.

“This is my friend,” Trump says in the video as he looks to Jones, before asking, “When are you announcing?” Jones then says “next week.”

Accompanying the video, Jones wrote in the tweet: “The location is set, Mr. President. I hope to see my fellow Georgians at Liberty Plaza at 10am as I share my plans for the future of this state. We will put Brad Raffensperger, Georgia’s Republican secretary of state, who also resisted the then-president’s requests to reverse the Peach State’s election results. Last month Trump endorsed a bid by GOP Rep. Jody Hice to oust Raffensperger in next year’s primary.