But, before Williams got them cut over the weekend, she broke her previous record, with her nails measuring a total of 24 feet, 0.7 inches (733.55 cm), according to Guinness World Records (GWR).

The nails will be put on display at Ripley’s Believe It or Not! Museum in Orlando, Florida, according to a press release provided to Fox News. The display is set to debut on Friday.

“It’s gonna be awesome,” Williams told GWR. “It’s going to be like a wax of myself even though it’s just my nails. I can’t wait to see that, for real. I’m going to be grinning from ear to ear. Just really think about it, it’s amazing.”

In a statement in the press release, Williams added: “It’s history for my kids and my grandkids. It’s very exciting.”

According to GWR, Williams hadn’t cut her nails for 28 years, since the early 1990s. Before she got them cut, she had to be very careful with certain tasks and was unable to do others, like washing dishes or putting sheets on the bed, GWR reported.

“With my movements I have to be very, very careful,” Williams told GWR ahead of her nail cutting. “So usually in my mind I’m already preparing for the next step that I have to do to make sure that I don’t hurt myself with my nails – or break them. I’m excited about cutting my nails because I’m looking forward to new beginnings.”

“I’ve been growing my nails for a few decades now,” Williams told GWR. “I’m so, so ready for a new life. I know I’m going to miss them, but it’s just about that time – it’s time for them to go.” 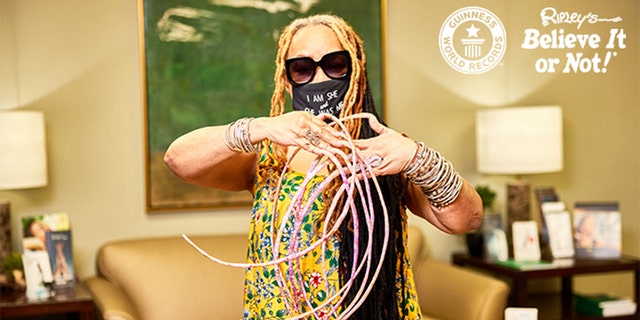 Ayanna Williams, from Houston, Texas, has held the record for the woman with the world’s longest fingernails since 2017. She got her fingernails cut for the first time since the early 1990s over the weekend.
(Guinness World Records/Ripley’s Believe it or Not!)

Williams got her fingernails cut at Trinity Vista Dermatology in Fort Worth, Texas, according to GWR. Dr. Allison Readinger performed the procedure, using an electric rotary tool.

According to a news release, Williams immediately felt relief in her thumb and knuckles after her nails were cut.

“With or without my nails, I will still be the queen,” Williams said, per GWR. “My nails don’t make me, I make my nails.”

She told GWR that she does plan on growing out her nails again — just not quite as long as her record.

Redmond lost her extremely long nails in 2009 after a car accident in Spain.