The U.S. Capitol Police top commander said Wednesday that more bodies are needed in the legislative building to address “intelligence gaps” and the increased threat security officials face in 2021.

“212 new sworn officers as well as 47 new civilian positions, that would fill some of those things that you mentioned in terms of intelligence gaps technology capabilities,” Acting Capitol Police Chief Yogananda Pittman told members of Congress Wednesday.

During testimony in front of the Senate Appropriations subcommittee, Pittman said threats against members of Congress had skyrocketed in the first four months of 2021, with a near 65% increase from last year.

And over the last four years, threats facing lawmakers have more than doubled with a 118% increase from 2017 — with the majority of threat-makers residing outside the National Capital Region (NRC).

“The number of agents required to provide an appropriate level of analysis, protection and enforcement necessitates a significant increase in personnel based on the threats trends year-over-year,” she said in a statement to lawmakers.

Pittman’s testimony highlighted that threats against lawmakers are not the only security issue the Capitol Police face. Four officers have died this year following attacks at the top legislative building.

Brian Sicknick died after being assualted by rioters who attacked the Capitol on Jan. 6, though a medical examiner report released earlier this week shows he died of natural causes, suffering from a series of strokes.

Two officers who were at the Jan. 6 attack died by suicide following the attack. 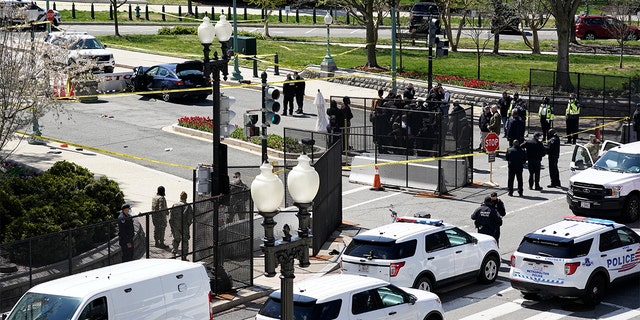 Police officers gather near a car that crashed into a barrier on Capitol Hill in Washington, Friday, April 2, 2021. (AP Photo/J. Scott Applewhite)

A fourth officer, William Evans, was then killed after being struck by a vehicle that slammed into a security barrier on April 2.

“On the Capitol Complex, the level of existential threats to the U.S. Capitol and grounds are increasing,” Pittman said, adding that the threat of these types of attacks remain a “very real and present danger.”

The acting chief of police told lawmakers that there needs to be a significant investment in the training, tools and information gathering police officers need in order to adequately confront the rising challenges.

She also noted that in order to end their reliance on outside forces, the Capitol Police need a “dedicated standby ready force” of 80 officers to be ready at the Capitol around the clock.