us-regions has a new way for drivers to show their high country pride.

The state’s Department of Motor Vehicles is offering 14 vanity plates with weed-themed words and phrases through an auction to raise money for the Colorado Disability Funding Committee.

BONG, GANJA, HERB and ISIT420 are among the tags on offer. 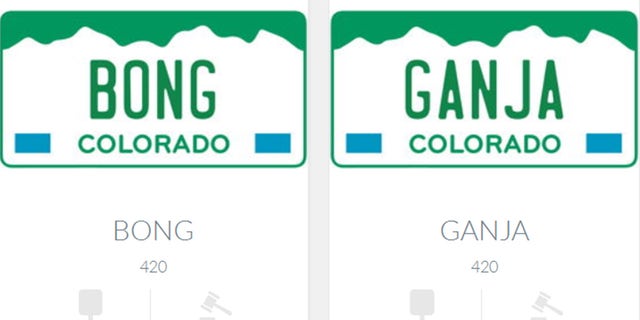 The last of those is a reference to April 20, which is celebrated by many marijuana users as Weed Day and is when the auction is scheduled to end.

At the time this article was published, the bidding for ISIT420 had reached $6510, followed GREEN at $2,500 and TEGRIDY at $2,270. Tegridy was the name of a marijuana farm depicted on the show “South Park,” which is set in Colorado.

Colorado voters passed an amendment to the state’s constitution to legalize recreational marijuana in 2012 and authorized stores began selling it in 2014.

According to the Colorado Department of Transportation, drivers can be prosecuted for driving under the influence if they have five nanograms or more of THC in their bloodstream, which can only be determined by a blood test, so police officers must rely on “observed impairment” to make arrests.

A recent JAMA study determined that there have been 75 additional marijuana-related road fatalities annually since sales began in 2014, while 27 percent of respondents to a 2018 survey conducted by the Colorado Department of Transportation claimed they drove high daily.

A warning on the auction pages notes:

“DON’T DRIVE HIGH! PLEASE USE CANNABIS RESPONSIBLY, WITHIN THE LIMITS OF ALL COLORADO LAWS.”

The Denver Post reported that a second 4/20 license plate auction is being planned for 2022.