In the wake of a fatal Tesla crash in Texas that authorities believe occurred while no one was sitting in the driver’s seat, Consumer Reports has demonstrated one way it is possible to engage the vehicle’s Autopilot feature without a driver in the correct position. 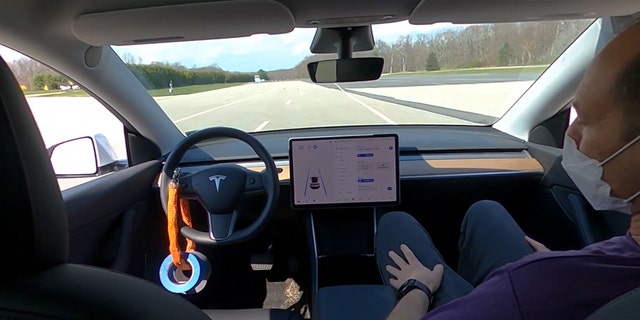 Consumer Reports dmonstrates how a Tesla can be tricked into operating in Autopilot without anyone in the driver’s seat.

Jake Fisher, Consumer Reports senior director of auto testing, took the organization’s own Tesla Model Y onto its private test track, which features lane markers like a highway, and set the speed to 0 mph with Autopilot engaged and the seatbelt buckled behind him.

The organization has previously determined that unbuckling the belt or opening a door will disengage the system.

Fisher then strapped a weight onto the steering wheel to mimic the torque created by someone’s hand holding it, which is how the car primarily monitors whether or a driver is paying attention. Tesla says it will disengage after a “period of time” if it doesn’t sense someone touching the wheel, but that period is not specified and inconsistent depending on the circumstances.

Some Tesla drivers have used similar methods to Fisher’s to defeat the monitoring system for videos posted to social media platforms.

Once the weight was in place, he slipped into the front passenger seat and used the speed control on the steering wheel to increase the speed to 30 mph. The car accelerated to that speed and continued down the track without offering any warnings that it was being misused.

Consumer Reports noted that this was meant to highlight Autopilot’s basic lack of driver awareness capability, rather than offer “specific insight” into the Texas crash, the circumstances of which are not fully known, but which took place on a residential road without lane markers.

Elon Musk said it was not possible for Autopilot to operate on a road without lines and that data recovered from the car showed that neither Autopilot or the more advanced Full Self-Driving feature were engaged at the time of the crash, but his claims have not yet been independently verified.

However, following the crash, one Tesla owner did post a now-viral video to Twitter of his Tesla’s Autopilot functioning on a residential street without any lane markers.

This isn’t the first time Consumer Reports has criticized Tesla’s driver awareness method. It has given General Motors’ hands-off Super Cruise a higher rating due to the facial recognition technology it uses to ensure the driver is in the seat and watching the road.

Tesla has recently started to test an in-car camera installed in the Model 3 and Model Y for this purpose with its more advanced Full Self-Driving system, but it’s clear from the Consumer Reports test that it is not currently in use in all vehicles with Autopilot.