A group of Democratic lawmakers in the House and the Senate on Wednesday introduced gun control legislation that would ban the sale, manufacturing, transfer, possession or importation of magazines that can hold more than 10 rounds.

Sen. Bob Menendez of New Jersey and Reps. Diana DeGette of Colorado, Ted Deutch of Florida, and Dina Titus of Nevada, rolled out the legislation Wednesday, known as the Keep Americans Safe Act.

Magazines holding more than 10 rounds were banned for 10 years under the Federal Assault Weapons Ban of 1994. “We cannot clearly credit the ban with any of the nation’s recent drop in gun violence,” the Department of Justice-funded study concluded in 2004. “Should it be renewed, the ban’s effects on gun violence are likely to be small at best and perhaps too small for reliable measurement.”

The bill would also prevent coupled or joined magazines.

The lawmakers said it would not ban the continued possession of any magazine that someone currently possesses, and noted that owners of such devices “would be allowed to keep the high-capacity magazines they already have,” but would not be allowed to transfer or sell them to anyone.

The lawmakers also noted that while the sale of newly manufactured magazines holding more than 10 rounds would generally be banned under the bill, there are provisions included that allow exceptions for certain current and former law enforcement personnel and for certain “authorized testing and experimentation.” 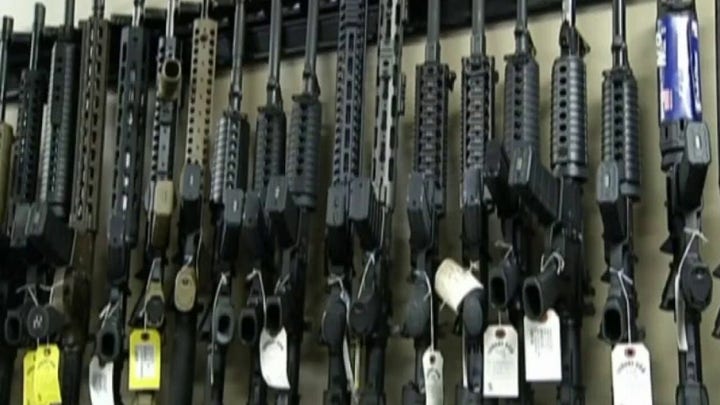 “There’s no reason why anyone, other than military, needs a gun magazine that holds more than 10 rounds,” DeGette said. “It’s past time for Congress to act on common-sense gun safety measures such as this. Banning the sale of high-capacity magazines in this country will save lives and Congress needs to act on this legislation immediately.”

The introduction of the legislation comes just days after Biden rolled out a set of gun control executive actions and legislative proposals to take on gun violence in the United States, calling it a “public health crisis” and an “international embarrassment.”

BIDEN ON THE SECOND AMENDMENT: ‘NO AMENDMENT IS ABSOLUTE’

Biden, last week, called on the Justice Department to propose rules to stop “ghost guns,” or kits people can buy legally to assemble firearms without serial numbers. He also proposed the DOJ create a rule on braces used for handguns, and to propose action on community violence intervention.

“Let me say it again, gun violence in this country is an epidemic,” Biden said. “And it’s an international embarrassment.”

But the National Rifle Association (NRA) slammed Biden’s moves, saying he has “made clear his sights are set on restricting the rights of law-abiding gun owners while ignoring criminals and foregoing substantive measures that will actually keep Americans safe.”